ORANJESTAD (February 3, 2019) – Once a week, on Sundays I write about the most relevant and interesting happenings on the island in my weekly newsletter.

Infrastructure improvements are continually made in Aruba as the road next to the high rise strip between Brickell Bay and Hostaria Da Vittorio is being redeveloped.

This section will be beautified with new asphalt on road, parking spaces, landscaping, lighting and new facilities.

Construction works are going to take about 5 months to complete, and should be done between April and May 2019.

These works are a part of a larger project to renew the entire high rise hotel strip, from Holiday Inn until RIU Antillas.

This project will happen in phases and is planned to be complete before 2020.

The road between RIU and Divi Phoenix is already completely renovated and has new asphalt.

Besides the infrastructure renovation in front of the high rise area, the beaches around the island are also going to get a makeover with new boardwalks, parking spaces, facilities, and activities centers.

Here’s a list of beaches that are going to be beautified in 2019.

Now locals and visitors have another option to dine, because Denny’s will be opening in Palm Beach. The diner will be in the same building that Tony Romas was located, which closed a few months ago.

Besides having hundreds of Denny’s in America, there’s also diners in Puerto Rico, Canada, Dominican Republic, El Salvador, Costa Rica and Venezuela. There was a Denny’s in Curacao, but this closed a few years ago, and now their reopening the doors on neighboring island Aruba.

The “Denny’s” sign is already up, but there’s no exact date yet when it will officially open.

Are you visiting Denny’s in Aruba?

It’s also going to be one of the first and only restaurant establishments on the island that will be open 24 hours.

An agreement was signed in July 2016 between Aruba Port Authority and Port of Amsterdam International to collaborate with different stakeholders for a multi-year plan in transforming the harbor front in Oranjestad into a sustainable mixed-use area.

The objective is to create an attractive and vibrant community in the downtown area for residents and visitors by combining recreation park with ocean view, residences, offices and shopping centers.

Port City will be located in the southwest part of the capital Oranjestad. It’s going to be a merge of three different locations – the former containers Harbor area, Paarden Baai and Bushiri Beach. All three areas combined are approximately 180.000 square meters.

The city will connect the harbor front to Oranjestad as well as welcome new cruise visitors to the island as they dock at the port. It’s also going to be a completely sustainable city within the fields of energy consumption, energy generation and water usage.

Here’s a view of port city in the future.

This is how the new downtown living will look like soon.

In order to develop Port city, the cruise port and cargo port in Oranjestad had to be separated. Now that the main cargo port is relocated to Barcadera, the project will sooner than later become a reality.

Bushiri beach as we know it will be developed to be able to swim, watch it become one of the most popular beaches on the island – a public beach.

According to the master plan, Aruba’s harbor area is bound to become a vibrant, economically flourishing and diversified port city within ten years.

Developments will start once the final designs and financing are in.

Soon you’ll be able to catch the latest movie in San Nicolas, because “De Veer Chain Theatres” confirmed they are going to create a new cinema on the other side of the island.

The new cinema will have 3 rooms, all with stadium seating, high definition digital Dolby 7.1 surround sound, super large screens and a main concession stand for food and drinks.

Construction will start once the final designs are in.

Aruba’s real first film theater was called “Gloria” and opened its doors in the 1930’s. It’s opening film was the the Oscar Winner – “All Quiet on the Western front”.

The Gloria theater was considered the top in entertainment in Aruba back in the old days. There was live entertainment before shows, and during the mid-week one could get two tickets for the price of one. 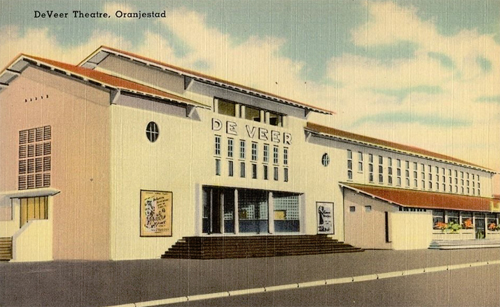 A movie theatre in Oranjestad back in the old days.

The last time a cinema functioned in San Nicolas was in 1992 (named Principal & Cinelandia). And now the cinema is going to reopen.

Besides a new cinema in San Nicolas, a new IMAX theater is being constructed on Eagle Beach, right across Sasaki Weg.

Here’s a view of the new logo.

The new logo, right in front of the airport.

The new logo can be seen at the entrance of the airport.

The design incorporates the aloe vera, islands sun, colorful arrows and the international airport code for Aruba, which is AUA.

Here’s a breakdown of the meaning of the new logo.

Aloe vera is a national symbol, and the plant is one of the most distributed products worldwide from Aruba. This plant has various medical benefits and is one of the oldest income source of the island.

Aruba is located in the Caribbean where the sun always shines. The islands climate is important, besides the beautiful beaches and happy islanders, visitors come to enjoy the islands warm weather.

According to the CEO of Aruba’s Airport – “It’s important for the airport to have its own unique branding that’s separate from the authority that runs it. We are convinced that the new Aruba International Reina Beatrix logo reflects the island’s cultural heritage and will help to further differentiate Aruba Airport from other airports in the region”.

Spanish offshore company, Repsol, found no signs of gas or other minerals after exploring a well, named Lagadishi, near the island.

Lagadishi is one of the four offshore wells experts said that could contains minerals. After finding nothing at Lagadishi, the Spanish offshore company is not sure if it will continue exploring the other wells.

If drilling does continue, they are going to explore a well named, Bon Bini.

The companies invested more than 55 million dollars into this project in the hopes of discovering oil or any other valuable minerals.

Millions of patients around the world use CBD oil, a cannabis extract, legal in many countries. This cannabidiol is not legal in Aruba yet, but the government is moving closer to legalizing this alternative medicine.

According to health inspectors, medical cannabis must be legalized in the same way as it has happened in the Netherlands, with strict conditions and under an opium law.

Strict regulations for medical cannabis prescribed by doctors and only available through prescriptions.

According to the Government, more detailed information will be released to the public as to how the process will be to make medicinal cannabis available for locals and visitors.

A Canadian company has its eye on Aruba to produce marijuana and food in the near future in event laws changes.

It’s not allowed to travel yet with any medical cannabis or oils in Aruba.

Do you have any plans for memorial day weekend?

There’s plenty of fun during this holiday as the 19th annual soul beach music festival will take place in Aruba.

The festival is going to offer an unique combination of excitement and a paradise setting.

Soul beach music festival is known to have the best internationally renowned performing music artist and comedians. The lineup for Soul Beach festival is not completely known, but the two artists that are confirmed are – John Legend & Ella Mai.

John Legend will be signing all of his hits – All of Me, Ordinary People, Green Light, Glory and Used to Love me. And everyone’s ready to sing the words to Ella Mai’s popular hits like Boo’d Up and Ready.

Besides a music festival, there’s going to be different beach parties, pool parties and other events around the island.

Save the date as discount packages are being pre-sold already.

A religious procession is leaving from the St.Teresita church in San Nicolas to a unique roman catholic shrine built into the rocks known as Lourdes Grotto.

The celebration will be for the 60 years existence of the unique catholic shrine.

The walk will take place on February 11, 2019 at the St.Teresita (San Nicolas) church at 5.30 PM.  At 6.30 in the afternoon there will be a “santo sacrificio” (mass prayer) at the Grotto where different pastors will send out prayers and blessings to visitors and locals.

If you’re on the island and want to experience the local religious feeling, be a part of the 60 years celebration of Grot di Lourdes with locals. 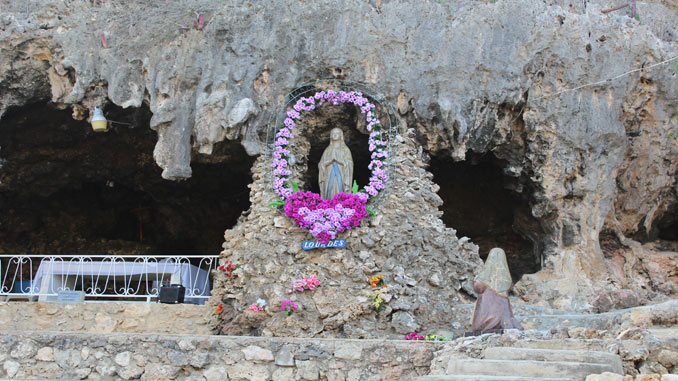 The famous Lourdes Grotto in Aruba

The Lourdes grotto is located on a short drive to the northeastern shore of San Nicolas, in Seroe Preto. It was created and named in the 1950’s after the popular religious landmark in France.


Win a Ferrari in Aruba

The Ritz-Carlton casino reveals their newest campaign for 2019 – you can win a Ferrari 488 Spider. This promotion is one of the best prizes ever, because this is the first time a luxury car at this caliber is up for win in the Dutch Caribbean. 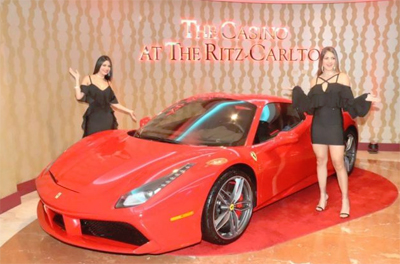 Are you going to be the winner of this Ferrari?

Anyone can win this car, but you have to be a member of the VIP Club. For every 80 accumulated points playing slots or $40 in theoretical winnings at table games you get a raffle to participate to win the Ferrari.

The winner will be announced in December 2019. During the entire year Ritz-Carlton will have different promotions, chances are big you can win a present.