Are you looking for a peaceful time, because it’s too crowded at the beach? You should visit the Alto Vista Chapel. It’s the perfect place to have your own moment and relax!

When you find you need your alone time just go to the other side of the tropical side of the island into the dessert in Noord. You’ll find the bright yellow chapel between cactus and dirt roads.

But before you read more about the Alto Vista Chapel sign up to Vactions By Aruba Newsletter. It’s free. In my newsletter I share the best Aruba travel tips and news only to my subscribers.

The name alto vista means high view. And when you stand in front of the chapel the back drop of the waves crashing against huge rocks is amazing!

Locals use the chapel as a place to pray. When inside you feel the peace and serene. No talking, barely a sound. Just peace and quiet in your own thoughts. 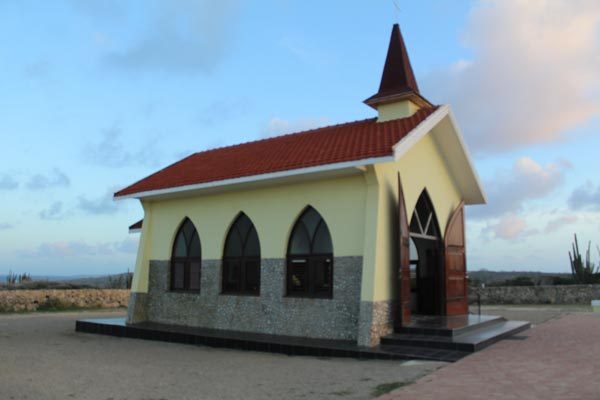 When you want peace and quiet come here.

The Alto Vista Chapel is more than 250 years old. And considered to be the birthplace of Aruba’s Catholic religion.

Besides a gorgeous chapel there is also an amazing peace labyrinth to be explored.

It has an unique and interesting design. Maybe the the shape of the labyrinth contains the secret to peace. I know one thing for sure, this place is beautiful. Another reason why I’m proud to live here. 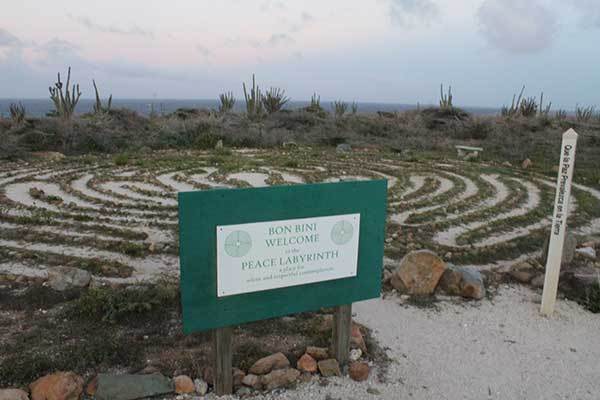 We’re all looking for peace in Aruba.

Plan a day to visit the alto vista chapel during your vacation – you won’t regret it.

The California Lighthouse Aruba was made to warn ships away from Aruba’s coastlines. Now it attracts visitors like a magnet.

Before I tell you everything you need to know about the California Lighthouse Aruba sign up to the Vacations By Aruba Newsletter. I share the best tips about travelling to Aruba and news only with my subscribers.

So, what’s the tale behind this magnificent structure?

It all began over a 100 years ago. When a boat shipwrecked on the northern coastline of Aruba.

Because of this incident the lighthouse was constructed. 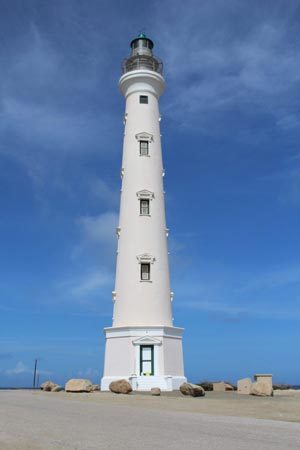 Isn’t it a beautiful building?

The shipwrecked boat was called California so they named the lighthouse after it.

A gentleman from Curacao, Jacob Jacobs, was the first to be responsible for the California Lighthouse.

The last person in charge of the lighthouse was an Aruban called Federico Fingal.

Today there’s a restaurant adjacent to the lighthouse. Back then this was the home of the person in charge of the California Lighthouse.

About The California Lighthouse

The lighthouse was designed by a French architect. The construction started in 1914 and was completed in 1916.

The colossal tower, made out of stone blocks, stands on an elevated terrain, about 10 meters above sea level.

The lighthouse is about 30 meters high.

It’s been closed for years, due to lack of maintenance.

However, good news is, it’s been refurbished since July 2016.

Read about the renovation of the lighthouse here.

An arid landscape surrounds the lighthouse. Cool trade winds. The area is dotted with cactus, trees and sharp rocks near the edges of the hill.

You can see nearby sand dunes from the lighthouse.

If you get hungry, you can buy something to eat at one of the local snack trucks parked in front of the lighthouse. 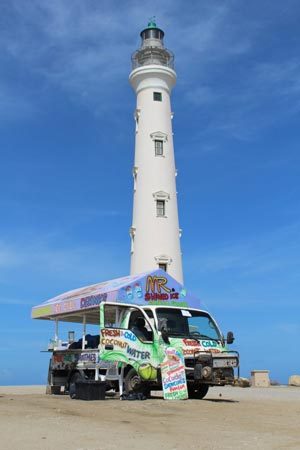 On weekends, I like to drive around the island, visit the lighthouse. Take some pictures. Buy shaved ice from one of the snack trucks and enjoy the view of Aruba from the lighthouse.

Location of The California Lighthouse

The California Lighthouse is located in the northern part of the island. This part of Aruba is better known as Hudishibana.

California Lighthouse is best reached by car (or taxi).

You can also take the bus, but it doesn’t go all the way to the lighthouse. The last bus stop is Arashi Beach.  So you’ll need to walk about a kilometer further and climb the hill!

It’s worth the walk, that’s if you like to hike.

Are you going to visit the California Lighthouse?