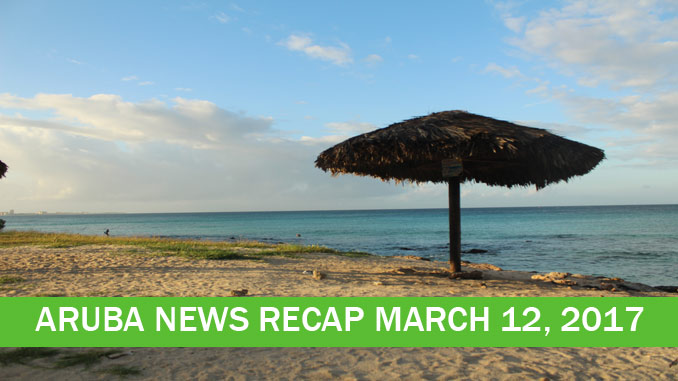 Are you searching for recent news out of Aruba in English?

From now on you don’t have to search for local Aruba news anymore, because you can find it right here on Vacations By Aruba!

Once a week (on Sundays) I do a recap of the most recent news out of Aruba – for your reading pleasure.

Recent News Out of Aruba Information

Reading the local news about your favorite place in the world keeps you up to date about what’s happening on the island.

But how true are my observations about paradise?

Well I get my info from watching the news on TV.

I also read local newspapers (online and some in print). And on my way to work I listen to the radio station locals call to discuss what’s happening in Aruba.

At the end of a happy week in paradise I pick the most relevant island happenings that you can relate to and translate it into English.

Royal Visit From The Netherlands

This week’s recap starts out with good news, because Princess Beatrix is visiting Aruba at the of end March.

What’s the cause for the royal visit?

The princess will be officially transferring the area known as Spaans Lagoon to Arikok (Aruba’s National Park) in an effort to safeguard nature in Aruba.

Arikok is part of a regional network of protected area, so if Spaans Lagoon falls under Arikok it will be automatically protected from that day forward…

Protecting the lagoon is important, because it’s known for beautiful mangrove trees and unique variety of birds.

And princess Beatrix is also going to visit the University of Aruba to witness debates organized by students, with themes like economy vs nature and tourism vs identity.

This years royal visit is highly anticipated by the locals and especially children who hear about the princess at school, but never saw her in real life…

If you’re on the island this week, you’re lucky – because we’re going to be celebrating Aruba’s flag day (and you can join the celebration).

Aruba’s official flag day is on March 18, 2017 – however, there are going to be some pre parties happening during this week to celebrate this important day.

On the March 15 there’s going to be a poetry night at Fort Zoutman (near Seaport Cinemas, in the downtown area).

The government is also going to officially open plaza padu (near the Aruba’s parliament) to reveal a new statue for “Padu Lampe” (known as the father of culture in Aruba, because he created Aruba’s national anthem).

The event is going to be held on March 17, 2017 on plaza padu , which is close to the Renaissance Marina Hotel. There’s going to be a great ambiance with folkloric music, dancing, local food and drinks.

Other Activities on Flag Day

It’s a tradition in Aruba that different activities will be organized all over the island.

For example, there is going to be an event in San Nicolas called “experience Aruba” at the Museum of Industry (starting from 12.00 AM until 18.00 PM).

Entrance will be 1 Aruban guilders (less than one dollar) to enter the museum and a dollar extra if you want to participate to win door prizes during the event.

There’s also going to be a super soup event at Cas Di Cultura (near Talk of the Town Hotel).

They’re going to be selling soup from different restaurants on the island (for example Barefoot, Casa Tua, Daniel’s Steakhouse, Driftwood, Aquarius and Taste of Belgium). And all proceeds are going to be used to fix the building of Cas Di Cultura.

If you’re going to be in Aruba on flag day, buy a shirt with Aruba’s flag on it (sold everywhere on the island) and join the different events, just like the locals… 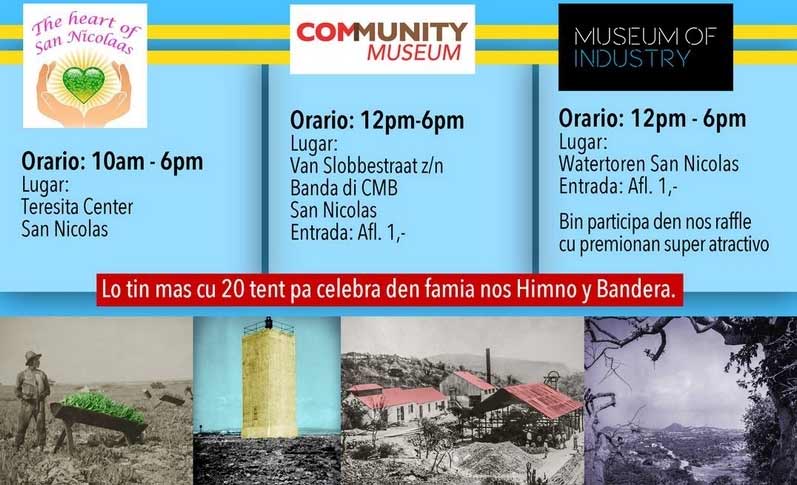 The prize was given by the Airport Council International that represents airports all over the world.

Every airport represented by the ACI had to give travelers a questionnaire.

More recent news out of Aruba about the Airport…

Triple A wants to invest in new buses to transport travelers.

Because the problem is that the airport can accommodate 20 planes during this moment, but there’s not enough gates for all aircraft…

Investing in more buses to transport travelers, while the airport is being further expanded, is going to be the key into maintaining the quality of service.

Aruba’s airport is beautiful, but far from done, because different departments are currently being renovated…but it’s till worthy of an award of this magnitude.

The Aruba Hotel & Tourism Association together with a local owned company named Welcome Media Marketing shared reusable bags at the airport last week to make travelers aware about the plastic ban in Aruba.

Welcome media has been sharing out goody bags to travelers in the arrival hall for years.

Maybe you’ve received one of these little Switzerland bags with information on where to eat, tips on things to do for fun and coupons in them once already. 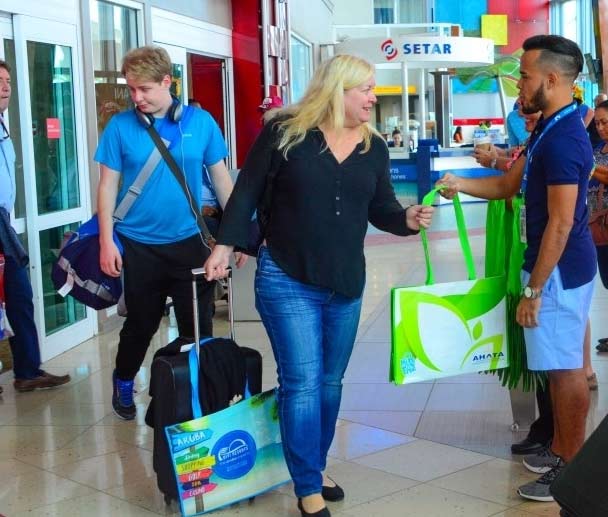 Sharing out reusable bags at the Airport.

Because more than 2.000 early birds tickets have been sold…

Early bird tickets started out at $15.00 dollars and sold out in a couple of days. The next batch sold out at $20.00 and now you can get your tickets for this years flip flop fest at $30.00 or you’re going to have to pay more at the door.

If you love urban music you should definitely visit Aruba for flip flop!

The fest starts out with an introduction party on March 31 at club emotions with DJ duo Shermanology. And on the 1st of April the main event with Konshens, Morgan Heritage and Rick Ross. To cool off there’s going to be a pool party at Renaissance Marina on April 2, 2017.

There’s a new chef in town at sunset grille located in the Hilton Hotel.

His name is Lij Heron…

He’s a new chef in Aruba, but has a lot of experience, because he previously worked at the Waldorf Astoria Hotel in Dubai. If you ever went to Dubai, and ate at Peacock Alley, Camelia Lounge or Lexington Grill, you might of heard of him.

Born in Jamaica, with a degree in electrical engineering, Lij Heron decided to follow a career in culinary field after discovering a passion for cooking.

During an introductory press conference he said that he accumulated a lot of experience as a chef and promised to bring the most delicious dishes at sunset grill.

Chef Lij Heron is known for his steaks and seafood.

Have you ever tried sunset grill?

If not you’ve got something to look forward to this trip!

This is Chef Lij Heron

There’s new a reason to visit Alhambra Casino on your Aruba trip, because they just announced their Elite membership program.

If you’re used to playing at the Alhambra Casino you know you already get discounts as a member, but if you reach 12.000 player points within less than a year, you have the privilege of joining the elite club and enjoy more benefits!

Alhambra casino is now offering the following to their elite members…

If you like to gamble in Aruba, you should visit Alhambra Casino and take advantage of the elite membership.

Renovations At The Mill Resort & Suites

The new owner of The Mill is going to be courtyard by Marriott.

Courtyard by Marriott caters mostly to business travelers, but they are planning to remodel the Mill to accommodate families also.

But the official renovations are planned to start April 1, 2018.

If there’s any update by the Mill, I will mention it on future recaps of recent news out of Aruba…. 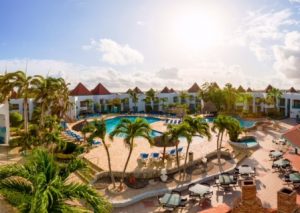 View of The Mill Resort

This is the official price on all gas stations on the island since March 8, 2017.

It’s always smart to plan your gas budget ahead, before you rent your car. So keep the new gas prices in mind when planning to rent a car in Aruba.

If you’re looking for a car rental check out our cars here.

Traffic Light At Balashi Out Of Service

The traffic light on the highway from Balashi beer factory (and ex drive inn) will be out of service beginning of March, 13 2017 until further notice.

The disruption in service is caused by repairs being done on new highway – the green corridor.

Alternative routes will be notified after the government publicly mentions it.

The prime minister of Aruba has officially signed a document stating the upcoming election day.

The people of Aruba will know its new political leaders on September, 22 2017.

The current government AVP (Aruban People’s Party) also signed an agreement that every political party needs to deliver their new official lists of members on August, 4 2017.

AVP has been governing the island for 8 years already (sitting 2 terms).

Are they going to lead Aruba for four more years?

I guess we just have to wait and see what happens…

The ministry of justice (Arthur Dowers) recently held a press conference where he signed a contract and announced the introduction of ESTA in Aruba.

Arthur Dowers signed an agreement with a company named Gamma research that develops the system for ESTA.

ESTA will increase safety in Aruba by screening anyone who wants to enter Aruba – if you’re visit is undesired you will be denied entry in Aruba.

A couple of weeks ago the ministry of justice announced that they are looking into the ESTA system, but now after signing an agreement it will soon become a reality.

The new system will be officially introduced in less than 8 months according to the ministry of justice.

I will keep you posted on more news about this ESTA system in future editions of recent news out of Aruba.. 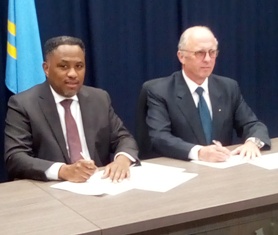 Did You Feel the Ground Move?

On March, 9 2017 something unusual happened on Aruba – an earthquake (including aftershock on the following day).

A lot of people claimed to have felt the ground move, walls shake and heard their roofs sounding strange.

I also felt the earthquake…

It was the first time I really experienced an earthquake.

To be sincere, it was quite a scary feeling I must say…

Luckily no one (or buildings) suffered damage by this earthquake.

The earthquake measured on 5.6 on the Richter scale.

Our neighboring island Curacao also felt the earthquake and suffered some damage (mostly to buildings.) 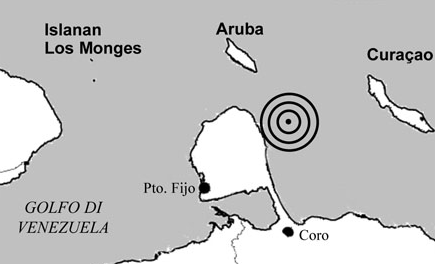 Location of the Earthquake

On March, 18 2017 there’s going to be a djampou (a native Aruba fish) fishing tournament held by Spaans Lagoon.

The person who catches the biggest one is going to be crowned rey di djampou “King of Djampou”.

If you’re into fishing and are on the island next week you should join this fishing tournament.

The event starts on 4:00 AM in the morning and ends the following day in the afternoon.

If you’re interested, ask the front desk of your hotel how you can also join the tournament… 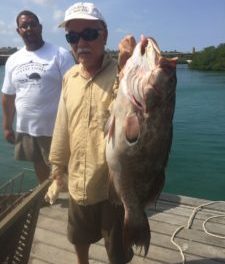 The most recent daybreak scan shows no significant features around Aruba. This week is going to be generally dry on the island with a lot of sunshine…

More Recent News Out of Aruba

Did you enjoy reading this week’s recent news out of Aruba recap?

If so, sign up to my newsletter to get future posts about the recent news out of Aruba via email.

Join the newsletter by typing your email in the signup form below.