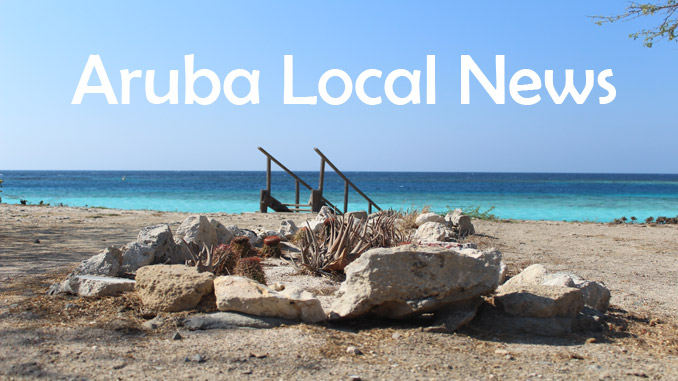 Once a week (on Sundays) I do a recap about the newspaper in Aruba.

If this is your first time reading my newsletter – welcome.

First of all I want to wish all dads a happy father’s day!

Let’s get to the newspaper in Aruba – a lot of new things happened this week, but let’s start with what’s still headlining the news in Aruba lately….

The oil spill is still a trending topic on the island.

International experts that have been hired to examine the oil spill have classified the spill as category tier 1 – which means is a mild spill, only causing localized damage.

The experts also said that the crude patches stuck on the coves should be left alone and not removed by hand, because it can be dangerous.

The patches on the coves will be cleaned by the ocean itself over time.

All the tar-balls that washed up on Aruba’s north coast are sinking beneath the ocean and is very hard to clean.

The beach clean up has been downgraded from intensive to passive and will be done regularly during the following 6 weeks.

Some birds that were affected by the oil spill, were rescued and had to be taken care of so they could survive, before they let them out in the wild again.

Aruba bird life conservation is in charge of saving all the affected birds and other animals from the oil spill.

If you are planning a trip to Aruba and want to do any excursions, take note that the beaches in Arikok (for example natural pool) is closed – you won’t be able to visit these beaches until further notice by the government.

Parkietenbos is Aruba’s official landfill dumping site since the 1960’s.

However, the people who live near parkietenbos have been complaining about smoke that has been coming from the landfill – but the government isn’t doing nothing about it.

This week there was a huge fire on the landfill accompanied with numerous explosions.

The government couldn’t ignore the big fire on the landfill and said that the dump will be closed very soon.

They are already processing all permits to be able to stop locals and companies from depositing their waste at parkietenbos.

Previous governments have tried to close the landfill numerous times, but none of them succeeded. Maybe because, the locals were glad that there’s a landfill to throw away their waste – however, now the situation is getting out of control.

The landfill is saturated with no place left to deposit waste.

The government needs to come up with a better way to process Aruba’s waste in a sustainable and responsible manner.

Horacio Oduber Hospital is under construction – two new buildings that are nearly finished, and a couple of days ago the hospital started another project.

They are renovating the current hospital building – renovations already started this week in the lobby, cafeteria and the pharmacy area.

Due to the current situation there’s going to be less space in the lobby area from the hospital until the renovation is completed.

This week the prime minister visited the new bridge at spaans lagoon to see the progress they are making with the construction.

The project manager of the green corridor stated that there’s a few things that still need to be done before the project is completed.

For example applying asphalt to create new roads at both ends of the bridge and a few more other works.

The bridge itself is practically done, it’s just missing a few finishing touches.

Everything has to be finished in August 2017.

The addition of the green corridor highway and bridge will cut the travel time to reach san nicolas from the downtown (and vice versa).

The government paid for the bridge in a form of a “lease”, which they will pay the company yearly for 20 years.

If there’s any damage to the green corridor, the company is responsible for fixing it – in the case they don’t repair any damage, the government can deduce the costs of repair in the lease.

This type of agreement with the company ensures that the green corridor will be maintained during the 20 years of the leasing contract.

The government signed important documents with CITGO and other stakeholders that will expedite the rehabilitation of Aruba’s refinery.

Agreements that were signed were in regards to expats control, customs protocol, service agreements and loans to finance the rehabilitation of the refinery.

The refinery should be operational in the second half of 2018. .

There’s good news for you if you plan to rent a car in Aruba – the price of gasoline just dropped 4,7 cents a couple of days ago.

At the moment a liter of gasoline costs 177.3 cents at the pump.

Take the gas price into consideration for your budgeting, if you’re renting a car.

If you don’t know which company you should rent from, let me personally help you find a rental car.

Click here send me an email and request a car rental quote from me personally.

Lotto is Still Looking for a Millionaire

The current jackpot is about 1.7 million dollars – enough to retire and buy a villa on the island.

Last week someone came very close to winning it, just missing the mega ball to claim the prize.

Within a week the total jackpot increased with 300 thousand dollars.

Are you going to be the winner for the next drawing, which is this Tuesday?

You don’t have to be a local to participate – even visitors can take a chance and win.

A ticket will cost you $4.00 – have a local friend buy you a ticket here, if you’re not on the island.

I am buying my ticket – if I win you will hear about it, I’ll be giving away some free airfare tickets to Aruba.

You can become a millionaire – if you’re a member of Tropicana Casino.

For the first time in history Tropicana casino is going to give away a million bucks.

Each casino has their own promotion and qualification to pick one winner, who will proceed to the next round which one of them is guaranteed to win one million dollars.

So if you’re in Aruba and never played at Tropicana before, sign up and start playing the slot machine to get your ticket for a chance to win the cash prize.

Aruba Wine & Dine wants all restaurants in Aruba to be more “green” by introducing biodegradable straws.

Plastic straws usually end up in the sea on Aruba’s beaches and forms a danger to our marine life – so the idea behind biodegradable straws is for restaurants to take a small step towards being more “green conscious”.

The current restaurants that are going to make the switch to these new straws are moomba beach, hadicurari, salt & pepper, fishes & more, dragon-fly, tango argentine grill, sopranos piano bar and cafe the plaza.

Hopefully the movement will be followed by other initiatives to introduce more sustainable products into the restaurant business on Aruba.

Popular Article – Read 15 Must Have Beach Items in Aruba

Yesterday a man died while working on a man lift near the highway of the airport, because he accidently hit his head into a high voltage electric cable.

He was fixing a billboard sign right in front of budget car rental – according to people who saw what happened, they say a huge fire and smoke form as the man touched the electric cable.

The police, ambulance, and firemen were notified about the situation – but unfortunately they couldn’t save the man’s life – he passed away.

This week the police were notified that a robbery was taking place at a business in the district of socotorolaan.

The employees of the place say two men walked in with firearms and demanded money. They didn’t have any mask on, and their faces were caught on camera.

But within 24 hours the police caught one of the robbers – a native on the island.

He will be interrogated and the police will probably find his helper and incarcerate him within no time.

This week visitors got into 3 different car accidents on the island.

Two accidents happened on sasaki weg near superfood, with one of the rental cars ending upside down in a ditch near sasaki weg.

A buggy also ended up upside down in a ditch near the Marriott resort.

Luckily no one was severely hurt during these unfortunate accidents.

Always be careful when operating a motorized vehicle in the island.

Every Sunday I post a weekly recap of important Aruba news – for free!

I invest my personal time to make this newsletter available for you and  I have a few monthly costs to run this website.

Join my newsletter today and I’ll email you my “Aruba on a Budget” e-book as a gift….