Once a week, on Sundays I publish the most relevant and interesting news updates from Aruba with all the latest information about the island.

The department of public works announced that the road starting from the roundabout at Sasaki, near Eagle Bowling until the intersection at Superfood will be closed at both ends as of March 1, 2018.

Entrance between Amsterdam Manor and Bubali Plas will also be temporarily closed.

All the aforementioned road entrances will be closed, because a new roundabout will be constructed at the intersection from superfood.

Here’s a view of the road closing…

A map of the deviations near Sasaki.

The roundabout is part of the “Watty vos Boulevard” project, which is a new ring road.

It’s been dubbed watty vos boulevard, named after Aruba’s first minister of Justice upon achieving status aparte from the Netherlands.

Watty vos Boulevard will alleviate commuter traffic and congestion along L.G Smith Boulevard and provide ready access for vacationers arriving from the airport to the principal resort areas.

Here are the following deviations near the road closings….

Traffic from Oranjestad towards Noord will be deviated at the Sasaki roundabout, direction Pos Abou, to Caya Ritmo or Caya Musica, exiting at the intersection from Bubali / San Miguel to reach in Noord.

Drivers will also be deviated at the roundabout from Sasaki towards J.E Irausquin boulevard.

Traffic from Noord to Oranjestad will be deviated at L.G Smith (intersection at McDonald in Noord), to the ex house of Cheng (close to The Mill resort), towards J.E Irausquin Boulevard direction Oranjestad.

A lot of locals and repeat vacationers, are concerned that the median on eagle beach will be removed.  And how the pedestrian crossing will work at the new roundabout near Superfood.

Creating a bridge, like the one at the roundabout near Pos Chiquito will benefit shoppers who walk to superfood.

All traffic towards the roundabout of Sasaki weg and intersection at superfood will be deviated for the upcoming 3 months (Until June / July 2018).

More information about the ongoing constructions will be announced soon by the department of public works. 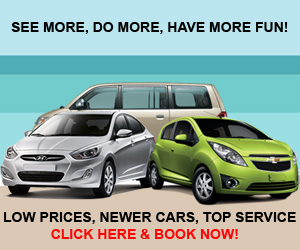 Change in Bus Route To Noord

The mayor public transportation of Aruba (Arubus), announced a change in their route for bus lines L7 & L7A, due to the construction of the new roundabout near superfood.

Here’s a view of the new route…. 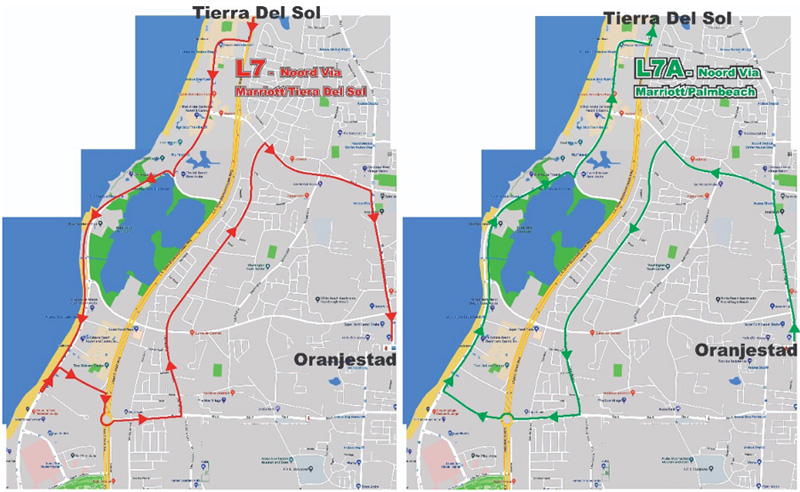 A map for the new routes.

Take note of the new route adjustments, which will be implemented for the following 3 months (until June / July 2018)

The ministry of Health of Aruba established that, as of March 1, 2018, the requirement for the Yellow Fever Vaccine proven by an International Certificate of Vaccination or Prophylaxis (ICVP), also known as the Yellow Book, will enter into force.

The decision was made at the suggestion and guidelines of the World Health Organization and  International Health Regulation.

The new measure does not apply for Chile, Uruguay and other countries that are not considered at high risk for yellow fever transmission.

If you’re travelling from one of the aforementioned countries, you must be vaccinated at least 10 days before the trip.

In case you’ve been vaccinated before for yellow fever and have the vaccination document, you don’t have to be revaccinated.

However, if your vaccinated, but lost your card, you need to get revaccinated.

Visitors who were born in areas classified as high risk for Yellow Fever transmission, but live in Europe and the United States and travel to Aruba, do not need to get the vaccine or present the yellow book.

Passengers who reside in Europe or the United States and travel from countries classified as high risk to Aruba do need to be vaccinated and present the yellow book.

Important to note the for airlines and cruises:

The yellow book is not required for…

The yellow book (ICVP) must be presented to the immigration officers of the Department of Immigration, Security and Alarm of Aruba (IASA).

If you have any of these (medical) contraindications for yellow fever vaccination, an up-to-date medical waiver can be issued instead of administering the vaccine.

Pregnant or breastfeeding women and people 60 years of age and older should consult with their doctor and in case they do not recommend administering it, they should provide the person with a medical letter with an official letterhead and stamping.

Shocos in Aruba are critically endangered, but a conservation progress was started to save the birds from extinction.

The shoco population is decreasing due to destruction of their habitat, with the recent constructions and developments on the island. And invasive animals like boa snakes, stray cats and dogs also are responsible for endangerment of the species.

The experts at the department of wildlife & conservation ecology from the state of new mexico started a conservation program for the shocos in collaboration with Aruba National Park and Aruba Birdlife Conservation.

They made several soft release sites around the island where shocos are known to live, in an effort to catch and relocate the birds to Arikok national park for special care and a chance to survive.

Park rangers also made artificial nests in order to stimulate the reproduction of shoco’s.

In 1999 a study was made and they found less than 200 pairs of shoco couples on the island. However, a healthy population of shoco’s requires over 200 pairs of bird couples.

The amount of shoco couples did not reach over 200 for the past 20 years.

According to ABC, it’s not too late to conserve our national symbol of Aruba.

Shoco was declared a National Symbol of Aruba in 2012 and in 2014 a legislation was implemented to protect the shoco as intended.

More information about the future conservation process will be released at a later date by the Aruba Birdlife Conservation.

A shoco on a cactus in Aruba, beautiful!

The government introduced a new task force that will be in charge of enforcing the dog act law (known as ley di cacho in Aruba), use of plastic bags and illegal dump sites.

The task force is a collaboration between city inspectors, police and lawyers.

City inspectors are now authorized to give out sanctions and fines for littering, or animal abuse.

The minister of environment also announced that more laws will be introduced and implemented in the near future to protect nature in Aruba. Such as a ban on foam boxes, and other plastic products which are dangerous to the islands marine life.

Most of these products will be replaced with biodegradable materials.

It’s been over a month since the President from Venezuela closed the frontiers of his country, banning all commercial communication between the ABC islands (Aruba, Bonaire & Curacao).

The decision to close the frontiers was implemented in an effort to stop minerals, precious metals and other items from illegally being exported out of Venezuela.

Due to the ban, local markets who depend on fresh fruits and vegetables from Venezuela experienced a shortage of products.

The bigger supermarkets import their fruits and vegetables from other countries. Like the united states, but importing fresh produce from Venezuela is cheaper and faster for smaller business.

Because of the current situation, farmers from Colombia offered to ship fruits and vegetables to Aruba at a reasonable price.

The frontiers between Venezuela and ABC island remains closed until further notice by the president.

The local government wants to depend less on importation of produce in the future, and is exploring new ways to grow fruits and vegetables locally on the island.

The minister of sport announced that a new state of the art baseball field will be constructed in the district of Dakota.

The former “Little League Ballpark” will be dismantled and reconstructed into a new baseball field.

According to the minister, the project is in the design stage, and construction work will start soon.

The baseball field will be completed before the end of 2019.

Aruba International Half Marathon will take place soon on the island.

It’s the longest race event in Aruba, nearly covering the entire length of the island, from San Nicolas to Oranjestad.

The route starts from Joe Laveist Ball Park, in San Nicolas, and ends in front of Alhambra Casino.

Local and international athletes from all over the world will join the race.

There’s already over 700 people registered for the competition, are you joining?

For more information and registration, visit the “Aruba Half Marathon website”.

Last year artist like Rick Ross and Morgan Heritage were on the sunny island, and gave one of their best performances in the Caribbean region.

The line up for this years fest isn’t known yet, but it promises to be good!

More information about flip flop will be announced by the promoters at a later date.

There’s a new  way to enjoy ice cream in Aruba.

Ice cream rolls are prepared in front of your eyes by the vendors at Mimo’s.

They are made by pouring a mixture of your favorite flavors, fruits and candies into a -18 to -35 degree Celsius metal pan. The mixture is mashed and stirred using two spatulas, until it freezes and solidifies. It’s finally scraped into rolls for you to enjoy.

Find out more about this sweet dessert at Mimo’s ice cream rolls, open everyday from 5.30 PM to 10.30 PM.

Local Newspaper in Aruba - A Lot of Positive Developments