Once a week, on Sundays I publish a recap of news headlines in Aruba. If this is your first time reading my newsletter – welcome!

The island has been going through a lot of developments recently, since I published an Aruba news recap last week.

Here’s what happened on the island recently…

Another Oil Spill, Will Aruba Be Affected?

The local disaster council reported an oil spill in the area of Chaguaramas, which lies near the northwest peninsula of Trinidad.

Authorities in Trinidad noticed an oily substance in the water near the peninsula, but they don’t know the exact source of the leak.

According to the local disaster council, Aruba will not be affected by this recent spill, because the oil patches are drifting away from the island’s shores.

The damage of the previous spill in Trinidad & Tobago is still visible on the north coast of the island.

Local organizations had to pitch in to clean up the oil spill on the beach. The total cost to restore the beach up to where it is now is over $300.000. This includes cleaning materials, paying public workers to help clean and the revenue lost from the national park and boca prins restaurant due to being forced to close for over 3 weeks.

The expense report will be delivered at the government in order to send a claim for the company responsible for the spill.

The local fishermen are trying to reverse a legislation that the department of nature and environment proposed a few weeks ago, banning the killing or damaging of various different animals and plants.

They are upset because the legislation alsl bans the capture of grouper, sharks, conch, sea stars, coral and Caribbean spiny lobster to name a few fish species.

According to fishermen a regulation on the fishing is better than banning. They would rather deal with fishing regulations, for example restricted fishing in certain zones, the amount of fish caught, the size and gender. Since it’s banned now to capture Caribbean spiny lobster, you’re next lobster on the island might be imported.

Local fishermen tried to undo the legislation by organizing a signature campaign and wrote a letter directed the government, however they still haven’t changed the minds of those in charge of disapproving the law.

Expect them to still try to save their profession and bread and butter with different further action against the government.

A coalition has finally been formed after almost a month since the government elections.

The coalition is going to be formed by 3 political parties, which one of them (MEP, a traditional party) has the majority of votes, but not enough to govern the island by themselves.

During a press conference all 3 leaders signed an agreement with the important issues they will focus on.

The list of priorities include: integrity and applying good governance protocols, restoring Aruba’s debt and solving social issues on the island. Other priorities of this coalition is lowering the retirement age, creating more sustainable projects, combating crime on the island, improve the island’s healthcare system, investing in education and creating more job opportunity are among the points that they will work on.

Now that a coalition has been formed, the next step needs to be taken, which is screening the members of the political parties to find out who will be in charge of different sectors like the economy, education, public health, energy, tourism, justice and infrastructure.

History will be made in the main streets of San Nicolas as local and international artist transform several buildings with murals during “Aruba art fair 2017”.

The art fair is a 3 day event with a main purpose of exhibiting and selling art made by local and international artists.

Not only is the goal to exhibit and sell art, but also to create awareness and educational art programs for kids to stimulate their talents.

It’s also great opportunity to see how the artist create murals from start to finish.

Over 10.00 people visited the art fair last year. This year promises to be bigger with more art, activities, contests and street performances.

If you want to find and buy art made by local artists in Aruba, this is the place to be.

There’s also going to be a photography contest titled “Nature & Faces”. Judges will select 5 pictures out of all the submissions and the winners will be displayed during the art fair.

A popular luxury and lifestyle travel magazine named Condé Nast Traveler recently announced Bucuti & Tara Beach Resort as one of the top 40 hotels in the Caribbean.

Over 300.000 Condé Nast readers casted their votes for the best traveler experiences and Bucuti received more than enough thumbs up to be nominated among the list of great hotels.

“Thank you to all our distinguished guests who voted Bucuti & Tara for being among the best resort in the Caribbean” said the GM of the hotel during an interview after receiving the good news.

Bucuti & Tara Beach Resort is an adult only resort and is a perfect place to stay if you’re in looking for a special getaway. There’s even a restaurant called Elements that has one of the most romantic settings to have a beachside dinner in Aruba.

After many years of not being in use, the old bushiri hotel on L.G Smith Boulevard is finally being dismantled.

The contractors in charge of dismantling bushiri closed off the area with fences since the government announced the project about a month ago.

Step by step they are bringing down the building with the help of heavy machinery and equipment.

The hotel is being dismantled step by step.

Bushiri hotel has been a ruin for over decades already, but it’s time for this old hotel to go. The government is going to turn this area into a public beach and recreational area.

Due to the works being done on bushiri beach there can be a lot of dust in this area.

It will take between 6 and 7 weeks to dismantle the building and clean up the area.

High season for cruise ships in Aruba started this week as 5 ships were docked at the same time at the port this week.

More than 10.000 cruise passengers were shopping in the downtown area, spending the day at the beach and exploring the island by jeep tour. 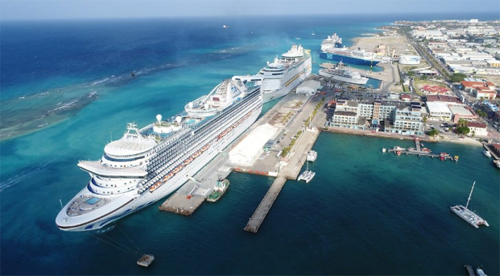 5 ships docked in the port, lots of tourist.

Having so much cruise passengers and ships docked at the same time on the island is a record breaker in terms of tourism. However, this is only the start of high season, so there’s going to be more cruise ships coming in the following months.

Expect the downtown area to be a bit busier than usual when the ships docked. If you want to rent a car in Aruba, send me an email and ask me for a car rental quotation.

The Aruba tourism board started a Tourism Oriented Police unit, which is an visibility team focusing on safety for visitors in the area of downtown area.

TOP will be dispatched when there’s a large amount of visitors in the main street, in order to provide protection and assistance in case of any emergency.

Area’s that will be patrolled by the TOP are the cruise port, royal plaza, L.G Smith Boulevard, surfside beach, linear park and the central bus station.

This time guests will experience a mixture of seafood appetizers, main courses and wine.

The Chef at Hadicurari handpicked the best of what seafood has to offer and came up with some outstanding arrangements for the upcoming culinary fest.

He shared some tidbits about the menu – it starts with oysters. Followed by tataki,sashimi and sushi. And ending the fest with delicious cod filets, mussel, lobster, scampi, shrimp and a seafood paella!

Hadicurari is located between Marriott Surf Club and Moomba beach.

Do you want more related articles about Aruba like this? If so, sign up for our weekly newsletter to get your newsletter delivered straight to your inbox every week for free.