Once a week, on Sundays I write about the most relevant and interesting happenings on the island in my weekly Aruba news reports.

What You Need To Know About The New Tax 2018

At the moment taxes are 3,5% (BBO 2,5% – BAZV 1%). The tax is going to change in two segments. The BAZV will be increased by 1% and a new tax will be introduced (BAVP 1,5% – Belasting Additionele Voorzieningen PPP projecten)

According to the prime minister, BAVP is a temporary tax that will go towards paying for the PPP (public private partnerships) projects approved by the previous government (Green Corridor & Watty Vos Boulevard). And the tax was also implemented in order to reform the tax department on the island into a more fair and simple system.

The banks in Aruba had exonoration since 2007 from paying taxes (BBO) on income generated from their services (administration fees & interest rate).

But the exoneration will end and they will have to pay their fare share to the government.

So for example, if the bank charges 5 Aruban guilders ($3.00) for transaction or administrative fee’s (30 cent of this 5 guilders has to go the the government – and the bank keeps the rest).

There’s been lots of rumors that the bank will start to charge 6% on every transaction, as a fee, but not this is not true. However, it does depends on the banks if they will increase certain fees in order to pay the 6% tax on their earnings.

It’s possible that the price for white bread (which is in the basic food goods) can increase, but this is not yet official (still being discussed between government and bakers).

The government revoked the permission to build a wind farm in Urirama and will evaluate where to relocate it, far away from residences.

Locals who live nearby didn’t agree to the new wind farm project, because they were worried about their health, noise and also the visibility within this area will be lost. More than 10.000 signatures were collected by locals to stop the project.

Urirama is the landscape area close to alto vista chapel.

Can you imagine this beautiful backdrop gone forever?

The government wants to invest in renewable energy, but not at the expense of nature and people.

Most likely the wind turbines will be relocated to the current wind farm located in Vader Piet (San Nicolas).

According to the minister of transport, there are a various European companies who are interested in being a part of the fast ferry project for the ABC islands (Aruba, Bonaire & Curaçao).

Before the project moves forward, the government needs to make an investigation and assessment to find out what is necessary to make the fast ferry project a reality.

Representatives from companies interested to manage the ferry will be on the island to give a presentation to the governmental departments. And afterwards sign an MoU between Aruba, bonaire & Curacao to start the construction of a harbor.

The harbor will be constructed in the area of San Nicolas according to the transport minister.

The maritime border between Venezuela and Aruba is finally open since June 7, 2018 after being closed since the first week of January 2018.

After the border was reopened the first few small boats transporting fruits and vegetables docked on the island, bringing long awaited goods to local market owners.

When the border was closed, goods had to be imported from USA and other countries, which were way more expensive than from Venezuela.

The government also mentioned that from now on there will be stricter controls when importing goods from venezuela (passengers and goods have to be properly documented).

Aruba Starts To Think About Growing Own Produce

Minister of agriculture made an agreement with experts from Wageningen university to exchange information on agriculture.

This is an effort for Aruba to start growing their own fruits and vegetables, and not depend from importation.

The experts at Wageningen are willing to travel to Aruba so they can investigate the possibilities to grow produce on the island (and what will be required)..

Farmers will also be educated on advanced growing techniques (for the weather conditions in Aruba), and locals who are interested can also learn how to grow fruits and vegetables on their own.

Not only does the minister of agriculture want to make agriculture another pillar in the economy for Aruba in the future, but he also wants to include agriculture in our education.

Three Areas Designated To Be protected By Marine Park

Decades ago the island started the project to create a marine park in Aruba (both on land and in the ocean). However, only half of the project was completed, the marine park on land which is national park Arikok.

A marine park consists of an area protected to preserve a specific habitat and ensure the ecosystem is sustained for the flora and fauna that exist there.

But now the government is resuming the other half of the project: marine park in the ocean.

There are in total 3 areas destined to be protected by law soon.

The first one is the beaches close to National Arikok.

The second area are the beaches near Sero Colorado, Baby beach, Rogers Beach and Lago Keys (all will be protected because of the corals which have an impact on the sea life).

The third area that will be protected by the marine park will be the beach of Santo Largo, until Spaans Lagoon and Mangel Halto.

This area is located on the south coast of Aruba and contains the largest amount of mangroves on the island (including a reef, great for snorkeling).

This area is also known to have dolphins that pass by to give birth to babies.

How To Kayak The South Coast of Aruba.

Start of Drilling For Gas or Oil

The vessel “West Capella” will start exploring beneath the waters surface for oil or gas this week.

It will explore a site named “Bon Bini” not far from the coastal waters from Aruba.

If you’ve been to the island recently, you’ll notice many drill ships around the coastal waters, and wonder what they are doing there.

These are ships who are waiting to move on to another project, and some of them are researching the surface waters for more explorations like west capella in the future.

The construction works were restarted, after several weeks of works being stopped for the construction of Watty Vos Boulevard (at the roundabout near Cumana).

According to the director of public works and minister of infrastructure, the works were hindered due to technical issues. However, this has been resolved and works are on again.

Construction near the roundabout at cumana is scheduled to be completed in August.

The department of public works closed the main road L.G. Smith Boulevard (Sasaki Weg), east of Super Food Supermarket (as of May 23, 2018).

And they reopened the L.G. Smith Boulevard west of Tropicana Hotel for traffic in both directions.

All detours will be indicated by barricades and warnings signs.

The roads near this area are closed, because of a roundabout construction near super food supermarket.

How To Rent A Car in Aruba Easy

Here’s a view of the detours on map and the roundabout near super food. 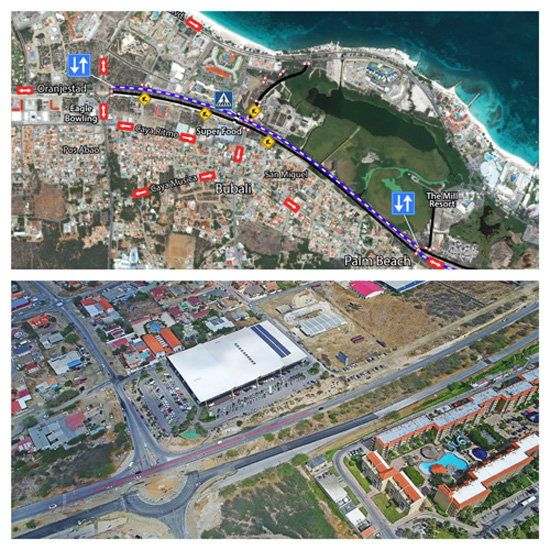 The current situation near super food.

Minister of transportation recently added more busses to the fleet of Arubus.

The buses are from a Dutch company called connections, which is one of the biggest public transportation company in the Netherlands.

During a recent trip to the Netherlands, the minister managed to buy 9 buses that were not in use by connections, but that are in good condition including air conditioning.

The buses from connections will be used only for a transitory phase until at the end of this year, when the fleet of Arubus will be strengthened again with more new buses, according to the minister.

The airline inaugurated a new nonstop service between Boston and Aruba (on June 9, 2018)

The new flights, which will operate weekly on Saturdays.

When are you booking your trip to Aruba?

If you’d like to contribute to maintain the website or want to buy me a beer so I can stay creative (because nothing great was invented by drinking water 🙂 ) – please make a donation of your choice.

How To Discover The Southern Coast Of Aruba By Kayak

Top 9 Stories That Made News Headlines in Aruba
0 replies