Once a week (on Sundays) I make a recap of the most relevant news about Aruba today for you in English, so you can stay up to date with what’s happening on your home away from home.

Aruba celebrates its culinary heritage during the month of October with a “Eat Local Aruba Restaurant Week”.

This is a culinary event with over 65 participating restaurants.

Every restaurant will present their top local Aruban dishes (lunch and dinner) for reasonable prices. The dishes are priced as following: $15.00 for two course lunches and three course dinners for $30.00 or $40.00.

The event starts today, October 1, 2017 until October 21, 2017. If you’re on the island during the month of October, be sure to get a taste of locally inspired dishes by the best restaurants on the island.

You don’t need a special pass or voucher to attend this event – just visit your favorite restaurant that’s participating in the eat local program and enjoy a local dish on their menu.

eat local in Aruba during October 2017.

The goal of ARCF is to make the public aware on the importance to protect and keep the beaches in Aruba clean. They also want to establish a marina management system in the future.

Originally known as “Aruba underwater Reef Clean Up”, they have been unifying people that love Aruba to protect the island’s marine environment since 1994.

The beach clean up is today (October 1, 2017) and it’s the 23rd time ARCF is organizing the reef clean up event.

They kicked off the reef care project since March 2017 by educating the kids with presentations and lectures of Aruba marine life. An estimated 3.000 primary and secondary students were reached through the lectures by the ARCF. All schools were asked to adopt a beach that they will clean up during the year, in an effort to get the kids involved in conserving and protecting our pristine beaches.

The rest of the community and visitors have been informed about the importance of keeping our beaches clean with pamphlets and flyers all over the island (including hotels).

Volunteers will clean up the beaches starting from the northwestern point all the way to baby beach and the most southern part of the island. This includes in the back of California Lighthouse, Arashi, Boca Catalina, Malmok, Hadicurari, Palm Beach, Eagle Beach, Surfside, Mangel Halto, Baby Beach, Grapefield and Boca Grandi.

Divers will be cleaning the popular dive sites on the island.

At the end of the day all volunteers will get a certificate and have many chances to win different prizes. 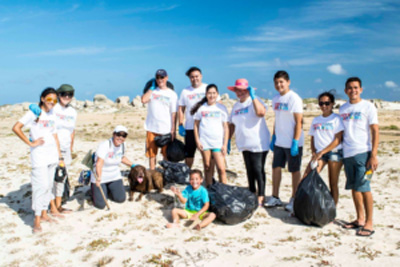 a group of volunteers cleaning up the beach.

Forming a Government After Election

The elections in Aruba are over, and none of the political parties received the majority of votes by the locals to govern the island alone.

In order to form a government between different parties, the Governor of Aruba had to meet with the different leaders of political parties to explore the available options to form a coalition.

The governor also consulted with the president of the parliament, president of the central bank of Aruba, chamber of commerce, and ex-Governor (Fredis Refunjol) for their point of view on the current situation and which parties they think should form a coalition.

After the meetings between different leaders in Aruba, there were priorities that were shared by the different parties and that were also important to the Governor.  For example, reducing debts, lowering the costs of products on the island, improving elderly care, reducing the age for pension and introducing good governance in the parliament (these are a few priorities in the list of many others).

But before a new government is formed, the Governor has to appoint a person as the “informador”. Which has been done this week, a well known lawyer on the island (Jacobus Andries Swaen).

His first findings are scheduled to be reported by the end of next week.

In Aruba the government is formed by “asientos” – there are 21 asientos (21 seats in the parliament) and for a political party to govern alone, they have to have the majority of asientos, which is 11.

However, the results of the asientos of the latest elections are: AVP 9 – Mep 9 – POR 2 and RED 1, which means no party can govern alone, only by forming a coalition.

Both leaders of the biggest political parties (AVP & MEP) said they don’t want to work together.

The leader of MEP doesn’t want to govern with AVP, because they have different visions and priorities. MEP is willing to negotiate with RED and POR to form a possible government.

According to the leader of MEP they will be a innovative government that will reduce our debts, strengthen our economy in the future, invest in our education, reduce the crime rate on the island and make locals and visitors their main concern and priority.

Aruba’s national park Arikok signed a memorandum of understanding with the University of Aruba (UvA).

The president of the park and the director of the UvA signed the agreement in a local fashion under a tree at hofi shon shoco at Arikok.

The MoU offers the students the chance to internship at Arikok. This gives students a much better understanding on how to go about preserving nature in real life.

Students with a scientific degree will research ways to conserve the flora and fauna in Arikok. These investigations that are soon to take place by the UvA students are of much importance in the conservation of nature on the island.

The academic department of UvA will guide and supervise the progress of the students.

“A partnership between Arikok and UvA is fundamental if we want to continue to conserve the nature of Aruba in the 21st century” said the president of the national Park.

The director of the meteorology department advised the community of a heat wave last week during a press conference, caused by the recent hurricanes in the Caribbean.

After another public announcement this week, he says that the same situation applies for the rest of this week.

Although the breeze is back again, the weather is still very hot during the day and at night.

In certain area’s of the island, where there’s less wind, the temperatures seem to be higher than normal.

If you’re on the island and rather seek shade at the beach than sit in a well air conditioned environment, remember to use sunscreen lotion between the hours that the sun is the hottest (that’s between 10:00 AM and 16:00 PM).

Drink lots of water and seek shade as much as possible.

After their inaugural triathlon event last year,  the organizers of this sporting event will kick off another one on October 22, 2017.

Endurance festival is a 3 day event which includes a food and music event, seminars and a main triathlon challenge.

This year the event has been expanded with more activities, like Fit Ville Caribbean (CrossFit Games), Aruba Kids Splash & Dash and a 5km Run-Walk.

Registration closes on October 20, 2017. If you want to register visit their website

Red Cross Aruba received tremendous support from the local Aruban community which donated first necessity items to those affected by the hurricane in St.Maarten.

Over 20 red cross volunteers have been dispatched to St.Maarten to help and they will be the ones who will receive these items and distribute them to those in need.

This week a dozen more volunteers  will be going to St.Maarten in order to provide further assistance.

Click on the amount you wish to donate and you will be directed to pay-pal on the next page. You’re awesome!