ORANJESTAD (January 13, 2019) – Once a week, on Sundays I write about the most relevant and interesting happenings on the island in my weekly newsletter.

The minister of science and sustainable developments announced that one medical cannabis product will be legalized this year and available at pharmacies. A local trading company is already on the list to import it (brand name not published yet).

Introduction to medical cannabis will take in small steps, only prescribed by doctors, available at pharmacies around the island, just like any other prescription medicines. 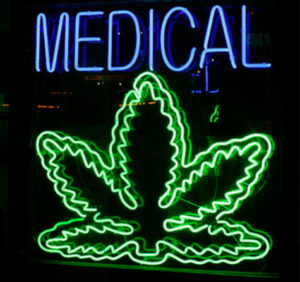 The first International Medicinal Cannabis Conference (Remedi) in the Dutch Caribbean took place in Aruba – this is another reason why medical cannabis will be a reality soon on the island. And it’s also going to be a new economic pillar on the island, since an international company, Affinor Growers, signed a license deal with Aruba to use their patented rotating vertical towers to produce hemp and food crops, as our island enjoys a favorable climate and soil.

Many visitors have medical conditions that they are prescribed medical marijuana by their doctor. But there’s a gray area in the laws in Aruba regarding use of CBD oil or medical marijuana?

Although CBD oil is allowed in the states of USA, it’s not officially legal yet in Aruba.

You are not allowed to travel with medical marijuana, bringing cbd oil is also a risk, even though it doesn’t contain thc. As soon as the new medical cannabis products are available on the island, it will be easier to get if your health depends on it.

The Government of Aruba elected November 2017 has set as high priority on its agenda the creation of change and stimulation of awareness about the topic of medical cannabis. And the direction of the venture is clear that one happy island is approaching the possibility of legalization of Medical Cannabis.

Camping is an old tradition in Aruba during easter holidays and this years season is right around the corner. It’s also Carnival season, the 65th edition, but after the last parade, locals go into camping mode.

Why is this important to know about camping on the island? Because the beaches are going to be packed with tens and local families spending the holidays, and there’s going to be worthwhile events to go to if you’re on the island. 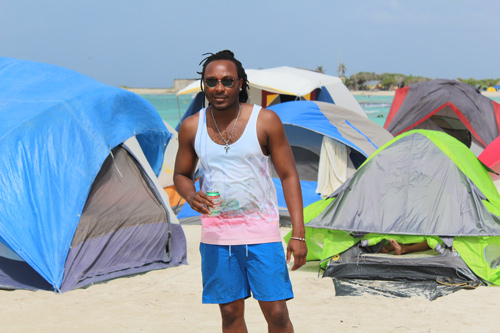 Where do locals usually camp?

Camping is not popular in front of the beach hotels, but on lesser known and open beaches. Here’s a list of beaches frequented by local campers:

Are you thinking about joining the local tradition? It’s a one of a kind experience.

There’s a permit needed to camp, and there’s a list of over 20 rules and regulations for camping on the  beach. Permits to camp are available at every police station.

Watch Out For Sea Turtles At Baby Beach!

You may have noticed sea turtles swimming in the bay near Baby beach, if you had the opportunity to visit recently. Baby beach is known location to spot sea turtles that come out the ocean to feed on grass and seaweed on the beach.

One of the many sea turtles in Aruba

In order to protect the sea turtles in this area, two new signs were added by Tortugaruba to inform visitors about the presence of sea turtles, and what’s allowed (and not).

Tortugaruba is a foundation that conserves and protects Aruba’s sea turtles.

Here are a few rules if you see a sea turtle at Baby beach (and around the island).

Nature and everything in it is ours, if we don’t protect it who will?

As of January 12, 2019 the district of Meiveld and Hato will be closed partially to start construction of two new overpasses as part of the islands biggest infrastructure project Watty Vos Boulevard.

Constriction works will take 6 months to complete according to public works departments.

The first overpass in Aruba

Good news for movie fanatics – a new Imax theater is being built near Eagle beach (right across from Pizza Hut on Sasaki Weg).

It’s going to be one of the most sophisticated movie theaters in the Caribbean and the first in Aruba! The entertainment in Aruba is entering another level.

The movie theater we all know at the Paseo Herencia Mall is closed, because their lease hasn’t been renewed.

Imax theaters are special, at the end of 2017 there were about 1302 Imax theaters installed around in 75 countries. And now Aruba is also on the list.

The movie theater at Renaissance also received an upgrade with two VIP Rooms.

50 people can sit inside the vip room comfortably in reclining chairs and enjoy additional services and menu choices not available on the regular ticket price.

The cinemas in Aruba have the latest movies.

Sustainable energy is a big part of Aruba’s vision, because it plans to be one of the only island in the Caribbean that plans to be 100% (or as close to as possible) reliable on renewable energy.

As of now, Aruba is one of the few islands in the Caribbean working steadily towards sustainable energy.

The new post stamp series features 5 different forms of sustainable energy technologies applied on the island at the moment. 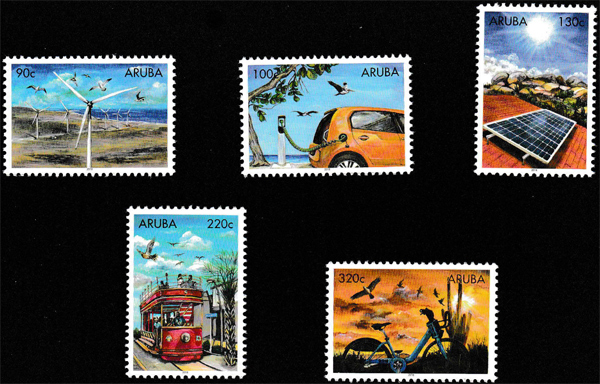 Wind Turbines are used to produce electricity that supports the Energy Company. If the the fuel turbines should ever fail, the wind turbines are then switched on to generate electricity for the island.

The first windfarm park was built in 2009 near the north coast of the island.

Electric cars are taking over the world, and this is also happening in Aruba.

These cars don’t use petrol, which makes for less pollution and they can be charged at strategic points around the island.

Solar panels are common on the island, because there’s plenty of sun.

These panels can transfers energy to a battery that generates electricity for electrical appliances and lamp in your house.

Most homes and commercial buildings have solar panels on the roof and rely less on normal electricity.

There’s a lot of bicycles for rent on the island, and most of them operate with solar energy. These bikes are great if you don’t want ti to put in so much physical energy to move around.

The new post stamp series are available for sale at the post stamp office located in Oranjestad, San Nicolas and Santa Cruz.


Aruba’s Currency Among Rarest in the World

Aruba’s banknotes are featured among the rarest currencies in the world by lifestyle blog theinsider.com

So, what makes the islands money so unique?

It’s the fundamental Aruban elements depicted on each banknotes.

The designer made sure to include different colors and images of native Aruban animal wildlife on the banknotes – from conch shells, rattle snakes, owls, frogs and groupers are depicted on Aruban paper bills. 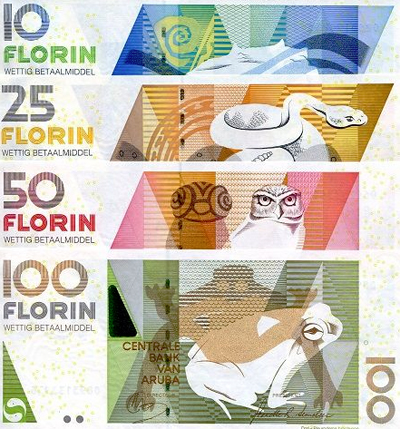 Besides colors and native animals, the Aruban banknotes are also combined with historical designs and decorative motifs found on pre-Columbian pottery.

Aruba’s currency, “Florin”, became official after the island obtained Status aparte within the Dutch Kingdom in 1986 and has a fixed exchange rate to the U.S Dollar.

Other currencies also mentioned as rare in the world by theinsider.com are from Australia, China, South Africa and New Zealand.