Once a week (on Sundays) I do a recap of the local Aruba newspaper.

The headlines in the newspapers shocked the community of Aruba.

Policeman Dies In The Line of Duty

This week a local policeman was killed in the line of duty by a man suffering from mental illness.

The police received a call that there was a family dispute at a house in the district of boegoeroei. As the policeman arrived and tried to mediate, the man suffering from mental illness attacked him with a large brick.

His partner opened fire on the attacker ending fatally for him.

The ambulance rushed the officer to the hospital, but unfortunately he passed away from his head injuries.

This is the first time in history that a cop dies during his line of duty on the island.

It was his first day on the job after a vacation. He was assigned surveillance in the district of Noord in Aruba, but he and his partner were called to assist in this family dispute, because all the other police officers were occupied with other incidents at the moment.

I understand you have many questions and so do I.

What happened exactly that the situation escalated to this magnitude?

Did the aggressor only hit the police once or numerous times?

Why did his partner take too long to shoot the aggressor ?

How come this mentally ill person was not institutionalized?

Why was there only one police car dispatched to boegoeroei, if they know this person is was mentally ill and already has a history with police?

One might think his partner didn’t shoot the aggressor at first because of Aruban laws, but that’s not true – the police law regarding weapon use states that an officer can use their weapon, if necessary – even without a warning shot.

It’s up to the officer to give a warning or not, which can be done verbally or with a “warning shot”.

Much is not known about what happened exactly, because the case is under investigation by detectives.

According to fellow officers, they lost a colleague due to bad leadership by the commissioner within the police force.

Constantly one of their colleagues are being rotated from their duties to do surveillance work leaving many officers working double shifts to bring security to all of us on the island.

The labor union representing the officers sent a letter to the police commissioner to express their concerns.

They also demanded a meeting with the minister of justice to evaluate the situation within the police force and bring solutions to prevent this from ever happening again.

This incident was tragic and unfortunate, we’re not used to this in Aruba.

Condolences to both family members who lost someone dearly to them.

Man Dies After Getting Hit By Bus

A local man unfortunately died after being hit by a bus this week.

The accident happened on the highway near the area of Balashi beer factory.

People who saw what happened say that the man stepped out of a shuttle bus, and crossed the road without watching for traffic, and a large bus hit against him.

He wash rushed to the hospital by an ambulance, but he passed away within a hour after the incident.

The public ministry announced a travel ban for locals who owe taxes.

This news went viral on the island and had many people worried, particularly those who owed the government money.

The travel ban brought confusion towards the public, but the minister of finance clarified the situation during an interview shortly after the initial announcement.

According to the minister, the public misinterpreted the news, because the travel ban is only for people who are planning to abandon Aruba.

Aruba has a income tax law (since 1947) that states, if you have a unpaid taxes, you are required to pay it before you abandon the island.

The press release by the public ministry was not directed to people who are going to be traveling during the summer, but only for people planning on leaving the island for good.

Phew – what a scare!

September 22, 2017 is the date that we as locals have the chance to vote for which political party is going to lead Aruba for the next 4 years.

According to the civil service and population register service a total of 70.751 people are eligible to vote this election.

At the moment there’s two big political parties, MEP and AVP, which the latter is in office now.

New political parties have been formed recently, but one that stands out is POR.

The leader of POR is the former minister of tourism (AVP) that abandoned the group and formed his own political party.

They have a big following, but not a massive one like AVP and MEP.

AVP lead the island for 8 years but I’m not sure they will stay in office this time around – I predict that MEP will win in the end, because people want a change.

The biggest hurdle AVP has with the people is the mega debt they created by borrowing money to renovate the island infrastructure.

Want to rent a car in Aruba, but not sure who to rent from? Click here to fill in a car rental request and receive a quote from me within a few hours.

This week the director of Aruba’s hospital gave the prime minister a tour of the new hospital buildings that have been build recently.

The prime minister was impressed with the modern building and the technological advances.

It’s estimated that in the month of August the first patients will be transferred from the old hospital into the new one.

According to the director of the hospital, the additional rooms in the urgent care section will shorten the waiting time considerably.

There’s also new x-ray rooms, delivery rooms with options to give water birth, a whole new floor for people that suffer from neurological problems, a separate floor for kids and more space to handle urgent cases.

A handful of students that went away to study medicine also returned to the island with their diplomas and got a job in the new hospital.

The grand opening will be soon, and we’ll have a look into the new hospital.

The government signed a contract with the AIB (Aruba Investment Bank) to start the much awaited restoration of the old Kennedy school.

According to the prime minister, after the school is renovated, it will be used for the department of education.

The renovations will be in the hands of Bohama Aruba N.V.

According to the local construction company the building will be finished end of 2018.

The minister of telecommunication gave mio until the end of July to pay off their debts – in arrears that go several years back amounting up to more than 7 million dollars.

Mio didn’t pay the government on time and the minister of telecom revoked their license.

The government already started the process to disconnect mio, and the company is responsible for removing its own cell sites – which should happen within a week.

What about mio’s customer base?

The government doesn’t have a say as to who goes where – everyone who’s connected to mio needs to decide whether they want to switch to Setar or Digicel.

Mio sent a message on facebook saying their goodbye’s and sharing the letters they got from the government to close up shop.

According to the company they can’t afford to pay the license, which is one million dollars a year fixed for 10 years.

The company wasn’t making enough money, breaking even every year.

The fish was so big it couldn’t fit in their small boat and had to be dragged by a jet ski.

After the two fishermen brought the big fish ashore, they were told that it’s the biggest one ever caught in Aruba – weighing a total of 186 kilo. 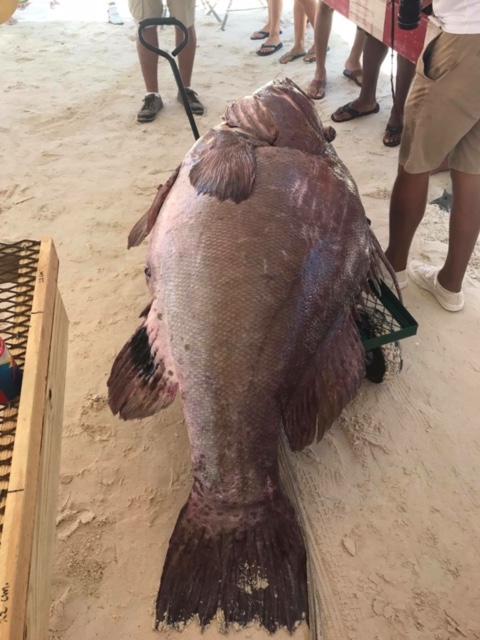 Would you snorkel next to this big fish?

Local Newspaper in Aruba - A Lot of Positive Developments
2 replies