Once a week (on Sundays) I do a recap of the most latest news of Aruba that you can relate to.

The Latest News of Aruba

You might be having a hard time understanding what is written in the local newspapers, because you’re not that fluent yet in Papiamento, or you just can’t find any real news, just touristy topics.

Whichever the case maybe, here you can get the most relevant and latest news from Aruba in English that pertains to you – for free!

Zika is a topic that just won’t go away, just like the mosquitoes that are hard to get rid of.

Many people wonder how the zika situation is in Aruba and if they should postpone their trip.

In my opinion, you should come to Aruba, because the hotel area in Aruba has the best protocol in regards to keeping the zone mosquito free.

However, depending on your situation, if you’re trying to get pregnant, and don’t want to risk, you may consider postponing the trip for next year.

To help you make a better decision, I have the most recent information to share with you with regards to the zika on the island.

The good news is, in comparison to the month of February and March, the amount of reported and confirmed cases of zika has reduced according to Dr. Wilmer Salazar.

He didn’t say the exact amount of cases, but assured the public that they are well below the minimum limit.

The decrease in the amount of zika cases is due to we’re going through a period of drought. No rain means no mosquitoes, which leads to lower cases of zika.

The minister of public health wants to create a new policy, so they can combat zika in Aruba with a different approach.

During a press conference he said that from now on, during October and March, they’re going to assume that there’s going to be a zika outbreak, because of the “rainy season” on the island.

By assuming that we will be dealing with a zika outbreak, when rain is expected, will make the government’s efforts more effective.

Diagnosis of zika is an issue at the moment, because the symptoms of zika are not exclusive to the disease.

The other problem with the diagnosis is that it takes too long to confirm if a person has zika or not (it can take up to 4 weeks). So this means all results reflect the situation of a month ago and not the current state of order in paradise.

All tests to confirm the amount of zika cases are being done by National Institute for Health and Environment called RIVM in the Netherlands.

Since last year ATA (Aruba Tourism Authority) teamed up with the department of public health to keep the hotels in Aruba mosquito free.

They have invested a lot in awareness projects for the locals, for their workers to inform the guests and manpower to continually sweep the hotel area for mosquitoes.

What Should You Do To Protect Yourself

Some people never have a problem with mosquitoes in Aruba, but the situation can be different for you. So what can you do to protect yourself?

During your trip you should avoid getting mosquito bites by…

After your trip, visit your doctor for a check up, even though you might not feel sick.

What are the best insect repellents?

The CDC recommends everyone to use repellents that include DEET, picaridin, lemon oil or eucalyptus.

Here’s some of the best reviewed repellents on Amazon containing these required ingredients by the CDC.

“The new green corridor highway and the bridge over the spaans lagoon should be open for public use in the end of July” – according to Carlos Zubieta, the director of the infrastructure company in charge of the project.

During a press conference he mentioned that only 25% of the green corridor projects remains to be constructed.

The green corridor consists of several roundabouts, a two- way high road that starts  from the airport, and ends in pos chiquito – a total of about 7 kilometers. Including the reconstruction of a 13 kilometers long highway until San Nicolas and a 13 kilometer bike path. 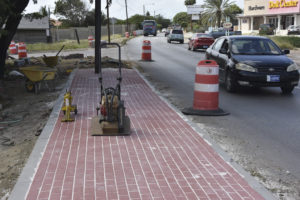 Roadside construction in the district of Savaneta.

According to the director, the most important things are done (the bridge and the two way high road) – now they are working on a roundabout near sero thijsji, in mahuma (near the balashi beer factory) and in the area of kibaima.

There’s another project going to be started soon – 5 mini parks in the green corridor area. The parks are set to be done at the end of the year.

An aerial view of the green corridor bridge.

I know a lot of you are animal lovers and have pets. It’s hard for you to see the street dog situation on the island, and we locals don’t like it either.

Fortunately a wonderful team of veterinarians and surgeons together with united dogs Aruba are going to be sterilizing stray dogs in an effort to end stray dogs.

They will be focusing in the districts of San Nicolas. 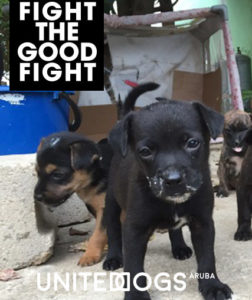 How They’re going to do it

They will have a mobile animal surgical hospital to operate on the dogs on site.

Volunteers are going to be in charge of the care of the animals before and after sterilization.

If you want to know more about their campaigns go to www.uniteddogsaruba.com

There’s a new shooting range for the Aruba’s police force. It’s located near the wind parks of vader piet in San Nicolas.

The shooting range was constructed by a local general contractor and Aruba’s public works company. FDA (Foundations of Development of Aruba) funded the project, which costed about 1.5 millions dollars.

Chief commissioner Dolfi Richardson was present during the inauguration of the new facility and expressed his gratitude during a speech.

According to him the shooting range allows all personnel that carry a gun to work (police, money transfer workers, and security), a chance to train, educate and keep their self up to date with the latest’s shooting techniques.

It’s great to see that the government is investing into the police to sharpen their shooting skills to protect and serve locals and visitors.

The police caught a total of 35 suspects of robberies committed in the first quarter of 2017.

In January they caught 5 of them, the following month they got 13 suspects and in March they managed to arrest 17. All of them are suspects in the crimes committed during the first for months of 2017.

I’ve noticed a crime trend in Aruba. A few months ago all robberies were directed toward taxi’s and elderly people at their home. Then it shifted towards tourists. After a while they were robbing lottery vendors. Now they are are focusing on homes and supermarkets.

Last week a house was robbed in the district of Santa Cruz during the day. The following day a robbery took place at a home in palm beach. The act was committed by 3 suspects. They went with $5.000, cell phones, and other personal items.

They duct taped the two people in their homes and took away everything. They reportedly came in through an open window and within a few minutes they left using the front door. 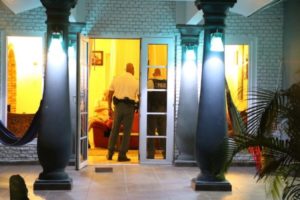 The house that was robbed in Palm Beach.

The Amount of Crimes on the Island

The police didn’t mention the amount of crimes in the first quarter of 2017. However, to provide transparency they explained more details about what these 35 suspects were detained for.

All arrests have been made in connection with robberies at restaurants (La Granja), residences (in the district of Noord – Safir, Esmeralda and Palm Beach). Boardwalk Hotel, Blue Village, Club Arias, Dennis Bar and Hagemeyer (a home store) near Price Smart.

Nothing To Worry About

The crime rate on the island isn’t targeted at visitors at the moment, but that doesn’t mean that one should be careless. Very often people get robbed because they leave valuable items in the car, visible to everyone. Or leave their personal belonging unattended when at the beach.

Just be careful of your surroundings and never let your guard down while you enjoy your vacation. Because, everyone’s looking for a relaxing time in Aruba after all….

The concept behind the store is, the more you buy the more you save. It’s located in Savaneta on the main road. They opened last week, they managed to gather a big crowd for the opening. 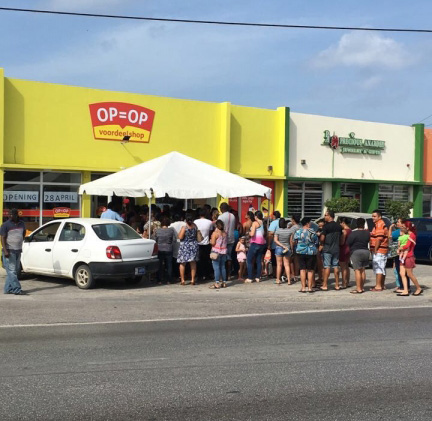 The crowd at the opening of the store.

If you like shopping at bargain stores, visit op=op in Savaneta to see what they have to offer, you might just get a good deal in Aruba for your favorite brand name products.

Fuels Marketing & Supply Aruba publicly notified that all gas stations are going to be closed on labor day (May 1, 2017).

If you’re on the island, and you have a rental car, remember to refill on gas.

Click here to get my personal help with car a car rental.

Open Day at the Military Base

On labor day, Aruba’s military base is organizing their annual open day.

Open day allows visitors to get a experience of the daily life of local marine.

The proceeds from this event are going to be donated to an organization the island.

Entrance is free. Bring your kids for an awesome day at the military base. 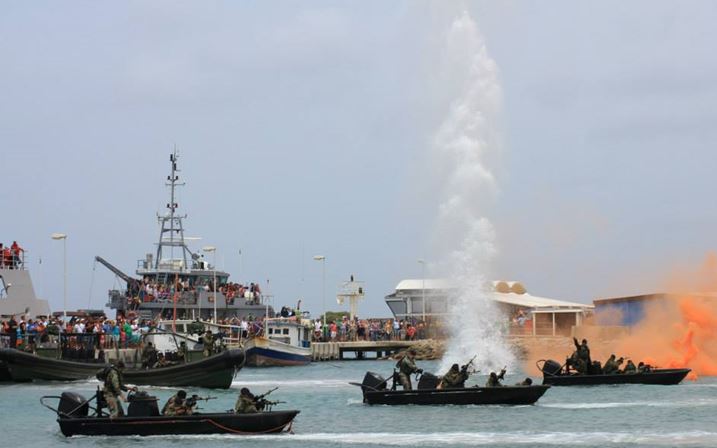 The military base during last years open day.

Recently the Aruba Hotel & Tourism Association announced that they discourage the act of rock stacking near the north coasts of the island.

Rock stacking has become a popular activity among tourists, the area on the north coast of the island piled with rocks is called “Wishing Garden”.

Many people think stacking rocks will make your wishes come true. However, this is not true, it’s just a myth started by a tour operator.

Every time you stack a pile of rocks, you’re taking away their natural habitat.

There’s a rock stacking demolition derby being held today (April 30, 2017) on the north coast of the island. The goal is to knock down as much rocks as possible to reverse the situation and preserve Aruba’s nature.

People who supported the movement on Facebook, signed up as volunteers and are going to restore the damage.