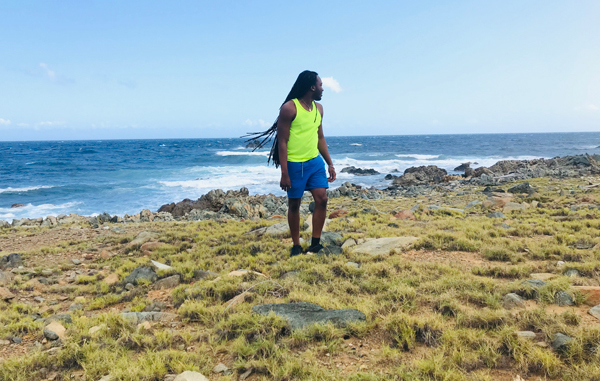 Hiking is not the first thing on your mind when you vacation in Aruba, but a cooling dip in turquoise waters and drinking rum punch at the beach bar sounds more like a tropical get away, right?

Although this looks like the way to go when in Aruba, there’s much more to experience than white beach sand and colorful drinks. Because miles away from the swaying palm trees is a stark and barren country side most visitors never get to see known as, Arikok National Park.

One usually visits Arikok with jeep tours, but this time I took the road less traveled and hiked the sands!

If you already did the jeep tour through the national park or never been before, let me show you what I found on my hiking adventure.


Discover The Country Side

As the sun started rising, I stood on a hill north coast of the island, overlooking Rancho Daimari, one of the oldest and largest coconut plantations in Aruba.

Rancho Daimari was named after a nearby secluded beach named Daimari bay, located within the Arikok National Park. 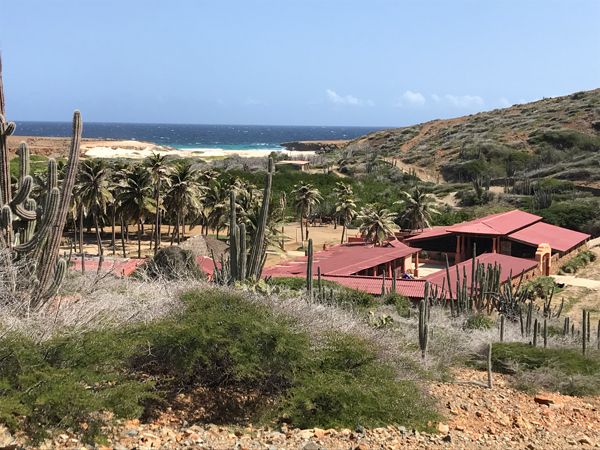 This view is just, wow!

Hiking the sandy paths and rocky trails of Daimari, I noticed phenomenal natural wonders only found off the beaten path in Aruba.

As I got closer to the coastline of Daimari, I could smell the sea salt in the air, and feel the hard blowing wind everyone comes to love once on the island. 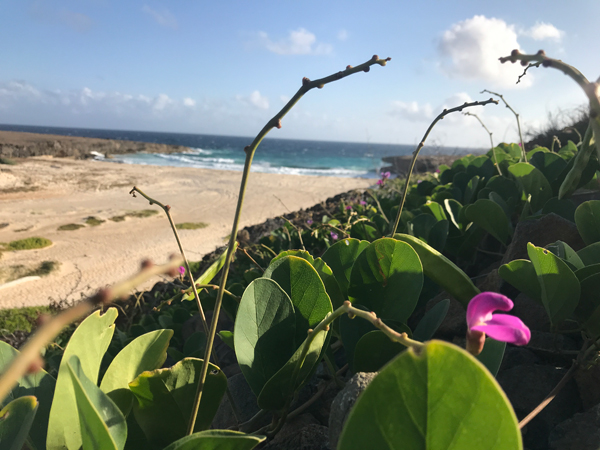 The coastline of Aruba is beautiful.

Exploring The North side Coastlines

Alongside the windward coastlines one will encounter local flora and fauna. The North side of the island is dotted with cactus and over 50 different species of tree’s. Cacti are important to the survival of different animals, especially for birds, because the fruits they produce are a main source of food.

Walking further down the coastline you encounter Dos Playa, one of the many different bays, locally known as boca’s.

Boca’s are small inlets connected to the ocean at the beginning of dry riverbeds.

Standing near a boca is a spectacular sight – watching waves crash against the rocky shores that have done so for hundreds of years before we were born. 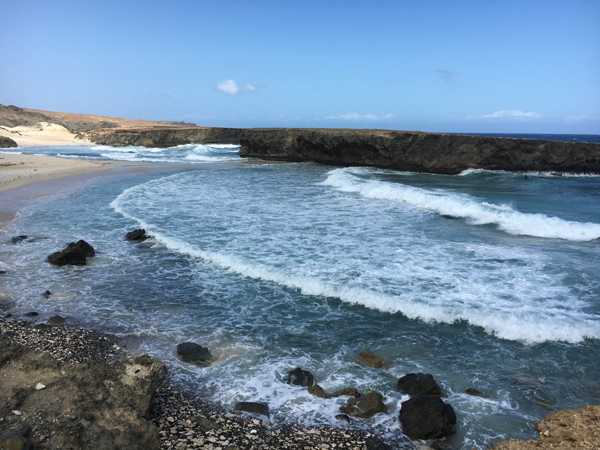 The trail alongside the coast line after Dos Playa leads to a large sand dune.

Sand dunes are important for several birds known to nest and is a habitat for many animals living inside of the national park. The sand dunes are protected by law, and it’s not allowed to drive on them with any motorized vehicle. 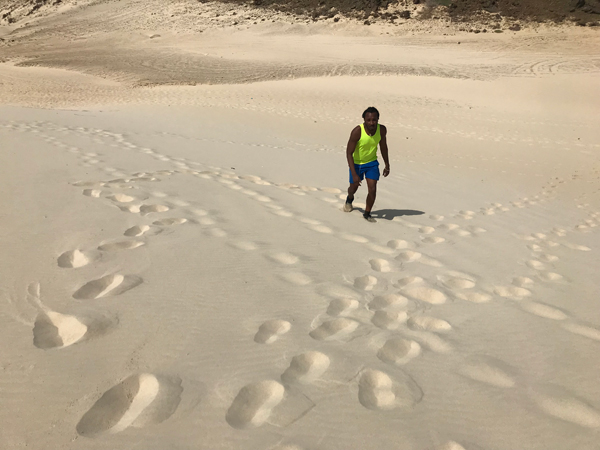 Hike the sands in Aruba 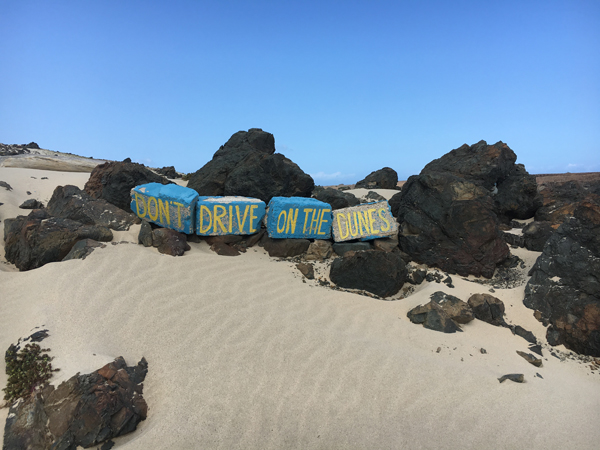 After hiking for over an hour, I made it to Moro, one of the other Boca’s, but unique because it has two inlets and there’s a giant limestone rock in the middle formed like Aruba, when you see it from above. Locals know this place as Klein Aruba, Dutch for Small Aruba. 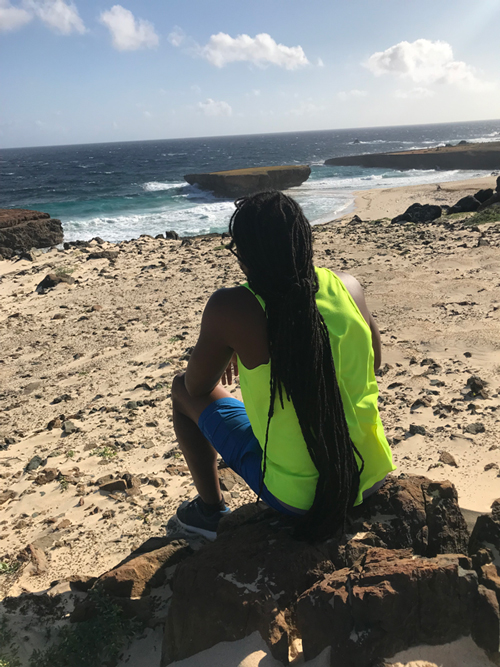 A well needed break after hiking for about an hour.

Arikok is dessert like, with high hills, big rocks and secret caves.

The national park was established in 2000 to protect and preserve almost 34 square kilometers of flora, fauna, geology, and historical remains in Aruba.

Inside Arikok one will find two of the tallest hills on the island, Arikok Hilltop and Jamanota Hill, which is 188 meters, the highest point in Aruba. Standing on this hill gives you a panoramic view of the island, you won’t find anywhere else. 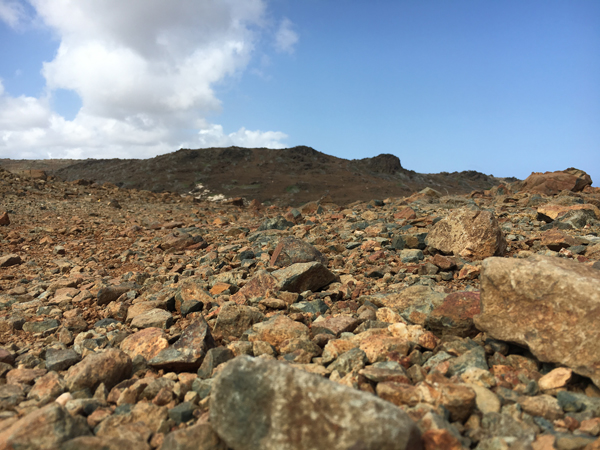 Arikok National Park has a visitor centre, housing a large variety of educational and informational programs. The visitor centre is the starting point of all guided tours and over 29 miles of hiking trails.

Entrance inside the national park from the visitors centre is $11.00

Finally, after passing Moro, I made it to Natural Pool, to cool off from the blazing heat.

The natural pool is one of the most sought after attraction by locals and visitors who end up exploring the national park. Most people know the natural pool as Conchi, but the real secret name is, “turtle pen” , because sea turtles used to swim in the pool before it became popular.

If you’ve never been to the Arikok National park, or only experienced it in a jeep tour, I recommend you to get to know the park by hiking the sands. 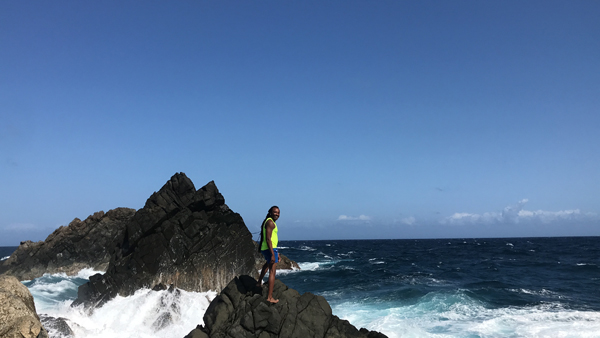 Standing on top of a giant rock at the natural pool.

How To Get More Aruba Articles

If so, sign up for our weekly newsletter to get your Aruba news updates delivered straight to your inbox every week for free.