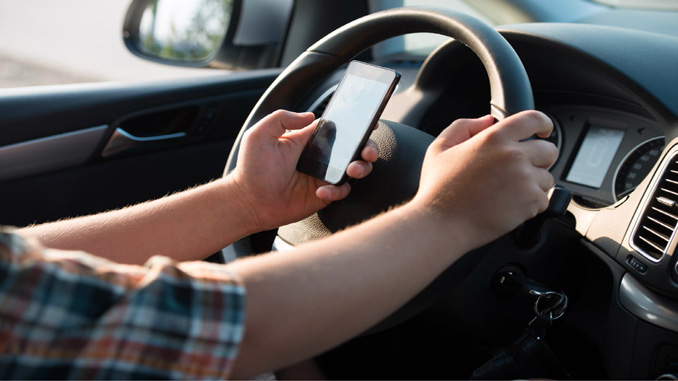 Once a week, on Sundays I publish a recap of the most current news in Aruba. If this is your first time reading my newsletter – welcome!

The newspaper in Aruba this week was full of headlines banning the use of cellphones while driving on the island. It’s a fresh new topic and still is the talk of the town, if you don’t know about it, keep on reading…

The Government Puts Its Foot Down…

The government officially bans the use of cellphones while driving in Aruba on November 1, 2017. Not only for driving cars, but any motorized vehicle, utv, atv, motorcycle, trikes and scooters – anything with an engine basically!

Law breakers are going to be fined $290.00 on the spot. This time the police aren’t joking around, because word around the island is they fined over 30 people already since the beginning of the month.

The new law counts for locals as well as for visitors.

That’s a lot of money to be dishing out for using your cellphone in Aruba while driving. It can be spent on other excursions and fine dining on the island.

If one causes an accident because of being distracted by a phone, they can expect a higher fine up to $6000.00 or even jail time, depending on how severe the accident is.

You may be asking, can you use “hands free calling in Aruba”?

The answer is simple, if the police notices that you’re not paying attention while you’re driving, because you’re using cell phone it will count as a traffic violation.

So put down the phone and pay attention to traffic while driving in Aruba.

Hunto Pa Aruba “Together for Aruba”

After a lot meetings and discussion about the visions of the different political parties, the new coalition finally agreed on the program they will follow for the next 4 years of the government and signed the official document.

The program is titled “hunto pa Aruba”, which means together for Aruba in English. It represents that all three political parties will put their differences aside and work together as one to lead the island forward.

“It wasn’t easy creating the program for the next 4 years, it took more time than expected” said the Aruba’s first female prime minister during an interview after signing the agreement.

The signing took place at the Haystack, (known as Hooiberg) which is the second highest mountain, located in the middle of the island. It can be seen from every angle around the Aruba.

The signing of the program at Hooiberg symbolizes putting Aruba at center of their focus during the next 4 years.

The new prime minister of Aruba also said that they started the process of sharing out tasks and selecting ministers.

After they decide who will be in charge of which sector, the screening process will begin for each nominee. This entails checking their background to see if they qualify to be a minister.

The focus of the new program is restoring Aruba’s economic situation.

It also includes a good governance policy. This means the government has to be transparent in their actions and show integrity within the parliament, because the previous government was involved in too many corruptions and scandals.

For example, the previous minister of labor is incarcerated at the moment for accepting cash payments in return for work permits.

One of the main agreements made by the coalition is to avoid separation of the newly formed government, because of any disagreements.

According to the new prime minister, this week they will select who will be ministers and they will be officially inaugurated within the parliament.

Aruba’s infrastructure, mainly the highways are being renovated at the moment. While driving around the island, one may notice a lot of road side construction and detours.

The first project is the green corridor.

It’s a new highway from the airport until the district of Savaneta. The green corridor also includes a new bridge in the area of Spaans Lagoon.

After an unexpected heavy rainfall last Sunday, the green corridor got flooded with water. This raised a lot of questions in the community in regards to the drainage system.

The contractors in charge of constructing the green corridor highway, which are Caribbean Infrastructure Company, Odinsa, and DOW (Aruba’s public works company) were present at the scene during and after the rain last week Sunday to monitor the flow of rainwater and drainage system of the new highway.

According the the director of DOW, after a heavy rainfall, the green corridor highway should be dry within 4 hours (especially if it rains hard and for a long period of time).

They will inspect the drainage system this week to improve the total time it takes to dry the green corridor highways after rain, preventing structural problems in the future.

The green corridor bridge is finished and it’s a breeze to drive on it.

Contractors are busy extending the linear park in the downtown area through the green corridor.

The new linear park will be a total of 1 kilometers long and with different fitness equipments and playgrounds for kids.

The path will be constructed directly on the previous bridge that we used to drive on to cross the sides of the island, right on the spaans lagoon bridge.

The watty vos boulevard is another project that includes creating a beltway for the Oranjestad and Noord area.

Construction of watty vos boulevard are still ongoing. But before they install the drainage system on this beltway, the contractors are running a few simulation test in a lab in the Netherlands on how exactly the water flows while it rains in Aruba, so they can design the drainage system of the new boulevard in the most effective manner possible.

The government announced the project of expanding the existing hospital building a few years ago.

Fast forward to today, the construction of the bed towers are completed. This week the nurses transported the first patients from the old building into the new hospital building.

“It was a very exciting and emotional moment to see the first patient enter the new hospital” said the minister of public health, who was a part of the project.

The new hospital offers patients more spacious rooms and modern equipment. For example an electronic bed, so they can adjust their beds automatically.

With the addition of two new hospital buildings, new technology and equipment, the quality of service at the hospital is guaranteed to improve.

Here’s an image depicting the new post stamps and their face values in Aruban money.

Known as the chameleon of plants on the island, because it adapts itself to most soil conditions and blooms beautiful flowers in a bouquet form in many gardens around the island.

The plant is used by locals who know about the power of healing of plants to treat stings by wasps, bees and centipedes. They break a branch and use the milky like sap to cure the bite wound.

This tree is indigenous to South America, but it has been brought to the Caribbean by the regions ancestors and also found in Aruba.

Bonhi di Cabay, which literally translates to “horse beans” in English, is beautiful tree with different colors of flowers from orange, peach and red. The bark of this tree is also used as medicine by locals.

It’s a species of cactus that grows nearly all over the island.

Watch out for the thorns of the tuna, because it can cause irritation and inflammation on your skin. Although the tuna can be scary because of their thorns, they are known to bloom very beautiful yellow flowers after a rainfall.

Flowers on this tree only bloom once a day, and they come in all different sizes, appearances and colors ranging from all shades of purple and green.

There’s over 500 species of Shoshoro trees around the island.

This is a tree is known as a climbing vine.

After a heavy rainfall the Beyisima tree blooms it’s pink flowers that covers fences and other trees like a beautiful blanket.

It’s also known as “coral di windruif” on the island.

The next post stamp is the Strea di Venezuela – 220 Cents.

When you translate it, it literally means the “star of Venezuela”.

This tree is originally from the South of India and Sri Lanka, but can be found throughout the island, especially in gardens.

If you translate “mata di lechi”, it means the milk tree!

This tree is originally from South Africa, however its present in many areas of the island.

Mata di Lechi produces a green fruit that contains a milky sap, which caterpillars feed on, before they transform into butterflies.

Hubada tree can be seen nearly everywhere in Aruba. They are popular because the flowers are orange and fluffy. These flowers can be beautiful, watch out for the Hubada’s thorns.

The stamps are for sale at the post offices in the district of San Nicolas, Santa Cruz and Oranjestad.

The central bank of Aruba announced their third edition of commemorative coins.

It’s a 5 Aruban guilders coin dedicated to 60 years of existence of the red cross on the island.

This special 5 guilder coin will have the logo of the red cross and 60 years red cross engraved in red.

In 2013 the central bank of Aruba issued a commemorative coin of 5 guilders dedicated to Queen Beatrix.

A year later in 2014, the CBA dedicated a 5 guilder coin to the new head of the dutch kingdom, Prins m Willem Alexander.

The new red cross coins will be available at all the banks in exchange for 5 guilders. Or if you want to buy the red cross coin in a special protective case it will cost you 22 Aruban guilders, which is about 13 dollars.

The coins are made from aluminium and bronze, have a diameter of 23.5 millimeter and they weigh 8.7 Grams each.

Here’s a picture of the red cross coin….

This is the 17th consecutive year that the tourism organization is organizing these clean ups events on Aruba’s beaches.

Over 500 people signed up as volunteers and helped clean the beaches in San Nicolas.

Believe it or not, they managed to collect a lot of garbage (different plastic items) that would otherwise landed in the ocean.

If we don’t protect Aruba’s nature, who will?

Please don’t leave garbage on the beach and avoid throwing cigarettes in the sand.


Donate To Vacations By Aruba