Once a week (on Sundays) I do a recap of breaking news on Aruba.

So what’s been happening on Aruba this past week?

Well a lot of new developments have taken place, let’s start with…

Protest Against Bringing Down Bushiri Hotel

The minister of infrastructure, recently announced that the old bushiri hotel will be brought down within 2 months.

There’s talks of constructing a new hotel, a recreational area for locals and a public beach.

However opposing parliament members don’t agree with the decision.

According to opposing party members, bringing down the hotel is destruction of capital.

Instead of bringing down the building, they find that the minister of infrastructure should do a study to find a better use for the building.

They recommended to transform the building into a nursing home for elderly people.

There’s many speculation to what’s going to happen to bushiri once it’s gone.

Hard rock hotel wanted to build, but couldn’t meet the financial requirements. Then Hyatt wanted to take over the building, but the government denied their petition.

I’m not sure what the plans are going to be exactly for the hotel.

But let’s see if the government is going to do what they promised – bring down the building.

Or if this is just another election stunt to get votes.

Taking Down a Crane

The giant crane next to cruise port is going to be toppled.

It was built in 1983, but in the recent years it hasn’t been used anymore and is taking up valuable space on the port.

There has been many attempts to pull down the giant crane, but it still stands tall.
If you want to watch the toppling, you can do so on Aruba ports webcam – portarubawebcam.com 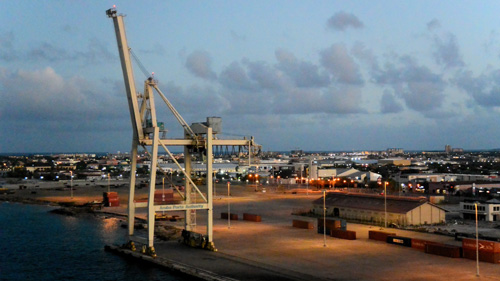 Bring Back The Wheel Clamp

Because they are starting to see their sales drop (almost 40%) – since the wheel clamp has been removed.

According to the kiosk owners, locals are occupying all the parking spots, leaving no space for visitors to park their rental car – as a result they don’t get clients.

There isn’t an official law yet to sanction those who park their cars incorrectly, so Aruparking can’t enforce any fines as a sanction. All they can do is tow your car, if you parked incorrectly(in yellow marked spaces, or on the sidewalk).

Not only the kiosk owners are being affected by this situation, but all the stores near the area of royal plaza are feeling the effect.

So what is the government going to do about the parking situation near royal plaza to help kiosk owners that sell Aruban souvenirs?

The new policy focuses on creating peace, safety and security in local communities.

Also to add more integrity within all the departments of justice, and a new plan of approach to help addicts.

Before this new judicial policy, the minister of justice focused on…

During a press conference the minister of justice mentioned that the majority of crimes committed on the island, are from people who entered Aruba illegally. That’s why he introduced ESTA (Electronic System for Travel Authorization) a few months ago to control and safeguard Aruba’s frontiers.

Soon everyone who wants to visit Aruba (except Dutch nationalities) has to register before entering Aruba.

According to the minister of justice, the new ESTA form will help decrease undesirable (and undocumented) travelers to Aruba, who don’t have any good intentions.

The government is still working on the new travel system, but it will be officially introduced in September (2017).

A few weeks ago “Toronto murder suspect” Michael Teddy Gibson made international headlines when he got arrested during a police car chase.

He is being suspected of murdering a Canadian visitor in the district of Jaburibari.

There are more suspects in regards to the Jaburibari murder case (a total of 8), however 7 of them were recently released.

The only person still caught in the mix is Michael Teddy Gibson.

All the other 7 suspects were present during the crime, but according to investigation they had nothing to do with it and were released.

The investigation is still ongoing, and I’m not sure what’s going to happen to Michael – whether he’s going to be incarcerated here or deported to Canada.

Insel Air is in a very sticky situation at the moment….

The airline owes more than 30 million dollars to a total of 240 creditors.

They also still need to pay their employees for the past 4 months – which adds up to almost a million dollars.

They haven’t been making any money recently, and have been banned to fly to certain areas.

A judge gave insel air protection against bankruptcy. But, the same judge added an ultimatum recently for the company to pay their debts (June 7, 2017) or present a plan to “restart” the airline company.

If they don’t pay or have a plan to make things better financially – insel air will be declared bankrupt.

The flights will be weekly (on Saturdays) from St. Paul International Airport in Minneapolis.

This is good news for those who want another option to fly direct to Aruba.

If I was you I would start checking airfare prices and book as soon as possible, because your trip to Aruba can’t come soon enough 🙂

This will be done to restore the small bridge that people use to cross near the roundabout. 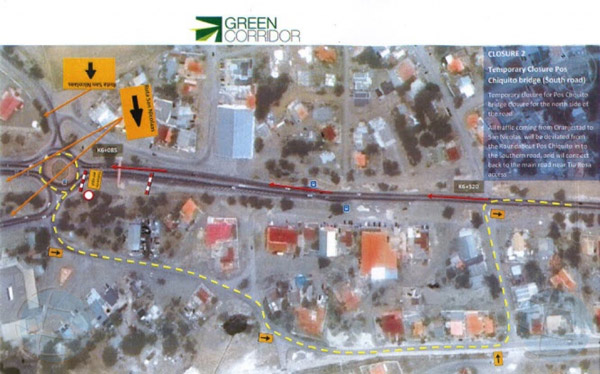 The bridge is deteriorated and is very dangerous, it could fall anytime and hurt someone.

All traffic coming from Oranjestad will be deviated from the roundabout.

So if you’re on the island during these dates, you need to follow the road signs to visit the east side of the island (baby beach, Rodgers beach, zeerover and all other popular spots).

Click here to let me help you rent a car in Aruba.

Aruba Tourism Authority recently placed free WiFi on the island, to enhance your experience during your vacations. Now when you take a picture or record a video, you don’t have to wait to get to the hotel to share it, you can do it right then and there – for free!

The locations where WiFi have been added are…

There’s a workshop you can attend at an art gallery store in San Nicolas called Cosecha.

The workshop focuses on conscious discipline, where all participants will learn to make a “Job Board” to help create responsibilities for their children.

This workshop is for parents, care takers, teachers, and anyone who wants to learn how to consciously discipline a child.

Entrance for this workshop is $20.00 – if you want to register send an email to arubacosechasn@gmail.com

The wines introduced during this event are from Ruffino, made in Italy.

Price to attend this event will be $66.00 – if you’re interested send an email to clive.faustin@setarnet.aw

The dress code for this event is casual.

Recent Aruba News You Must Read & Know About