Once a week, on Sundays I publish the most relevant and interesting happenings in my “Aruba weekly newspaper recap”.

The fast ferry that will be implemented in Aruba is a transportation system that’s already being used successfully for over 20 years in the Canary island.

According to infrastructure minister, the harbor for the fast ferry will be constructed in San Nicolas.

The minister signed a Memorandum of Understanding with RDA (refinery di Aruba) to transpass an area within the refinery back to the government to build the harbor for the fast ferry.

The ferry can transport between 300 – 400 passengers including 80 cargo trucks and cars.

It will be a mayor boost for the economy of the island, but especially for the district of San Nicolas, since the rehabilitation of the refinery has been put on hold for a undefined period of time.

The ferry will depart from Aruba, and reach Curacao within 2 hours. It will then continue to Bonaire, return to Curacao and Aruba on the same day.

The project is a collaboration and understanding between ABC islands, and the Dutch Kingdom.

The ferry will benefit the islands in many ways, for example having a faster way of transportation for cargo between the Aruba, Bonaire & Curacao.

The project will take between 2-3 years to complete.

Lifting The Ban on Spearfishing

During a meeting with local fisherman, the minister of communication, Transport & Primary Sector for the island, announced that he is in the process of clarifying the recently introduced list of prohibited fish species and lift a ban on spearfishing

Last year the department of nature and environment introduced an updated version of the list of prohibited fish species, however according to local fisherman the list is not detailed and confusing.

The minister will revise and clarify the list of species that is prohibited to catch, and it will be reintroduced.

The reason spearfishing is banned on the island, is because those banned it were under the assumption that it’s harmful to corals. For example, if a fisherman misses a fish, the spear could puncture corals.

However, local fisherman say they spearfishing is practised in the deepest part of the ocean, where corals aren’t found.

The department of nature and the government reached an agreement on the following two points.

More information will be shared by the minister soon.

Alert For Big Waves in Aruba

The meteorological department sent out an official alert for high winds and strong currents, which is still in effect for the rest of this week.

According to the department of meteorology, waves can be as big as 3 meters high on the north coast of the island (where it’s not allowed to swim).

The beach can also be rougher than usual at the other aforementioned bays.

Pay attention to strong currents and waves when swimming or snorkeling near Arashi,and beaches near the low rise and high rise area.

The recent pick up in the wind towards the ABC islands led to a huge amount of seaweed called “Sargassum” floating to our shores in the north coast of the island.

Sargassum is a brown algae that makes up the floating seaweed mats known as the Sargasso Sea in the middle of the Atlantic Ocean. These floating seaweed mats float in the open ocean, and provide a habitat for over 250 species of fish and invertebrates. And Seaweed acts as a first defense to capture incoming oil.

Near the shores at Alto Vista, the amount of seaweed reached 1,5 meters high.

The beaches near the low rise and high rise area are sargassum free! 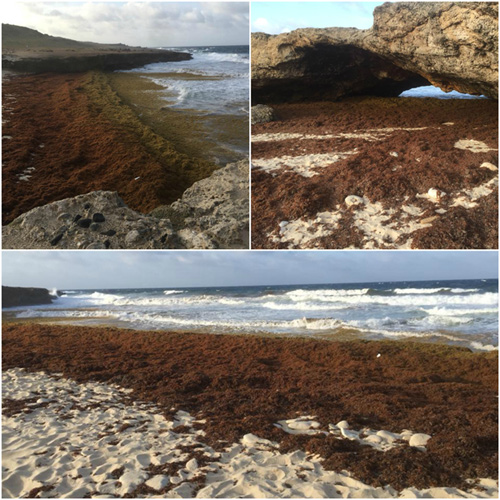 Washed up seaweed near Wariruri.

Locals and visitors are gathering at the north coast of the island to gather the seaweed that washed up on shore. More volunteers are always welcome, no registration needed, just show up and help collect seaweed.

A new roundabout is being constructed at the intersection from Superfood supermarket.

The reconstruction of this highway and roundabout will take between 3 to 4 months.

Here’s the new and updated map… 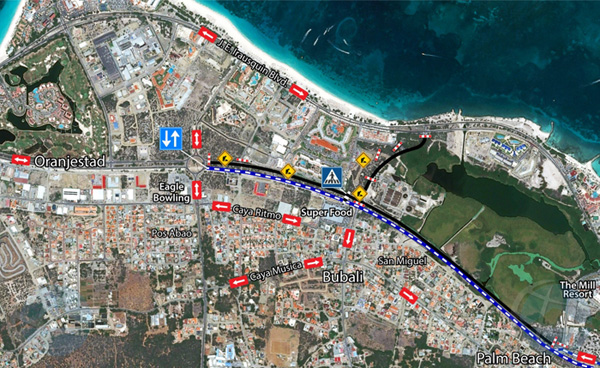 A map with new roadblocks adjustments.

L.G Smith Boulevard direction Noord will be dedicated at the roundabout on Sasaki, near Eagle Bowling towards J.E Irausquin Boulevard. And towards Pos Abou, Caya Ritmo, and Caya Musica.

Traffic from Noord, intersection at McDonald at South Beach will be deviated at the first right turn near ex House of Cheng, towards J.E Irausquin Boulevard and Oranjestad.

Rent a car in Aruba now!

Cosecha together with Taste My Aruba will be organizing the first ever “Art and Farmers market” at night – under the stars.

This will be the first edition, and the event will be dedicated to Himno y Bandera, which is the national anthem and flag day.

During the farmers market, arts and crafts made by local artisans will be displayed and for sale.

Traditional dishes and drinks will also be available during the event like, oyster soup, balchi pisca, bacalao, fresh made fish, and cake for dessert.

Cosecha, which is an at gallery store will also be open, if you’re interested in buying more unique arts and crafts made by local artisans.

Visit the Art & Farmers market if you want an authentic Aruban experience.

USA Today named Aruba as the 3rd most liked island in the entire world, according to their readers.

Aruba ranks among the top three most liked islands, because it’s positioned outside of the hurricane belt. And also the beaches, various beachfront hotel options, activities on the island, including the National Park Arikok with all of its wonders like the natural pool.

Aruba makes the list after Bora Bora and Dominican Republic.

Nowadays travelers are looking for a destination they can reach to easily with flights, fast, easy and as cheap as possible.

And the “one happy island” offers all the above and more!

The National Institution of Aeronautical Civil Venezuela implemented a total ban between the ABC islands and Venezuela again this week.

The president of venezuela already banned the commercial communication between  the ABC islands in January. However the initial ban had exceptions for travelers who were in transit between the islands, and those traveling with a Dutch Nationality.

Now the exceptions are also outlawed with the recent ban. Making a total block between the ABC islands and Venezuela.

Local authorities in Venezuela and news sources have confirmed the ban until further notice by the President.

It was just last year that Southwest announced that they will be changing their departure from Orlando to a new gateway in Fort Lauderdale.

According to the airline, the change will benefit travelers on a connection flight from New York, Boston and the north east.

As of March 8, 2018 Southwest will be operating daily out of Fort Lauderdale.

Travelers can visir Panda Express, Freshii, and Wineport while waiting for their flight to departure.

Wineport is a unique wine and champagne bar designed specifically for those passengers that want to sit back, relax and enjoy the view of arriving and departing planes on the airport. They also offer premium cocktails,  and a wide selection of craft beers.

This project was a collaboration between the  Aruba Airport Authority N.V. (AAA) and the Airport Hospitality Industry N.V. (AHI). 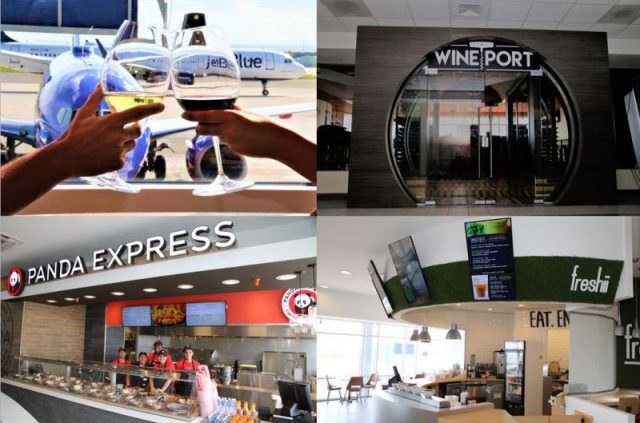 The airport also has new and modern bathrooms, right next to the shops.