Aruba is the first island in the Dutch Caribbean to have a scheduled flight service with British Airways.

As of March 2023, according to British Airways official website, you can travel to Aruba starting at £600, if you book now.

The flights are scheduled twice a week, on Thursday and Sunday.

Departing from London Gatwick Airport, to Aruba with a stop in Antigua.

The new British Airways scheduled flight is a strategic addition to the already seasonal flights out of London Gatwick Airport from TUI-UK.

The last time Aruba welcomed British Airlines was over 35 years ago, as a non-commercial flight.

All flights will be serviced by one of the airline’s top class aircraft, the B777 with a capacity of 336 seats.

The European travel market represents almost 10% of the total amounts of passengers handled by the airport for the first 7 months of 2022.

There are 4 main airlines that depart from Europe to Aruba, TUI NL, TUI UK, KLM and the new addition, British Airways.

The inauguration flight from British Airways is set for March 26, 2023.

Southwest Airlines recently announced that its resuming flights from Orlando to Aruba, after cancelation due to the pandemic.

One of the reasons why Southwest Airlines made the decision to resume flights from Orlando to Aruba, is because of the island’s amazing growth in tourism after the pandemic.

According to the Tourism Minister, the flights out of Orlando are significant to the island.

The flights from Orlando to Aruba are daily.

There’s also plenty of options to travel with Southwest to Aruba, from Baltimore and Washington, once a week, on Saturday. 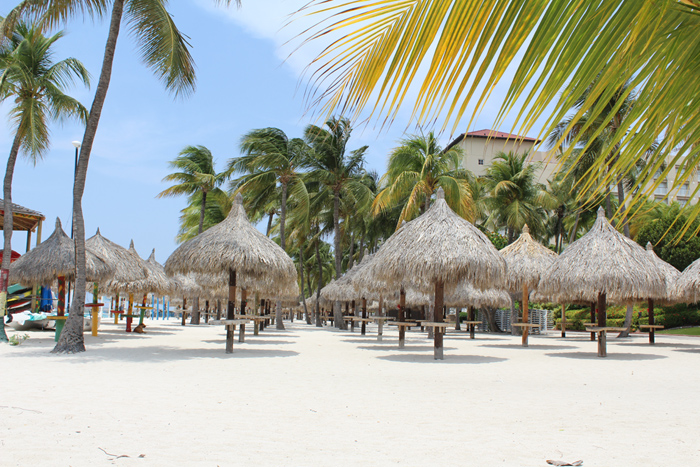 Coming back from a devastating pandemic, tourism in Aruba is steadily breaking records compared to 2019 and 2022.

Aruba’s tourism is frequently compared to 2019, as this is the last year of a normal tourism season, before the pandemic started.

The largest markets for tourism in Aruba are North America, Europe and Latin America.

What is propelling this growth for Aruba’s tourism?

Visitors like YOU are the reason for Aruba’s tourism! Thank you for supporting the locals on the island!

Everyone who visits Aruba, falls in love with the island, for different reasons.

You are part of a big group of visitors that have come to be known as family by many locals on the island.

If it’s your first visit on the island, or you have become a repeat guest, we Arubans appreciate you!

The Masterplan To Revamp San Nicolas

This master plan is part of the Government’s vision to beautify and upgrade the beaches and infrastructure of San Nicolas.

If you’ve been to Baby Beach recently, you might have noticed the newly created parking lots, new spacious beach to walk on, and new beach huts.

When renovations at Baby Beach enters phase 2 as of September 2022, you will notice more changes soon.

This includes enhancing the surrounding nature, a new court for beach sports and activities, creating new facilities to buy food and refreshments and new bathrooms.

The existing wall that protects newborn sea turtles during nesting season will also be moved further away to provide additional protection for the turtles, and make the beach wider.

A stone throw away from Baby Beach you will find Rodger’s Beach, which is also slated to begin renovations as of 2023.

The first construction works near Rodger’s have already started, which includes a newly renovated pier, and a new staircase leading to the beach.

After renovations start officially in 2023, a new 40 room boutique hotel will be constructed at one of the the abandoned buildings next to “Jads Watersports”, between Baby Beach and Rodger’s Beach.

Better known as the Sunrise City of Aruba, San Nicolas is known as one of the largest cities, located southeast of the island.

It’s rich in culture, tradition and buildings that hold many of the old stories and memories of the island, when a refinery used to be the second pillar of Aruba’s economy, next to tourism.

What can you expect to see after renovations are complete?

More details about the new upgrades in San Nicolas will be released soon by the Government.

There’s a new mural that’s getting everyone’s attention in the main streets of San Nicolas.

Here’s the mural, see picture below… 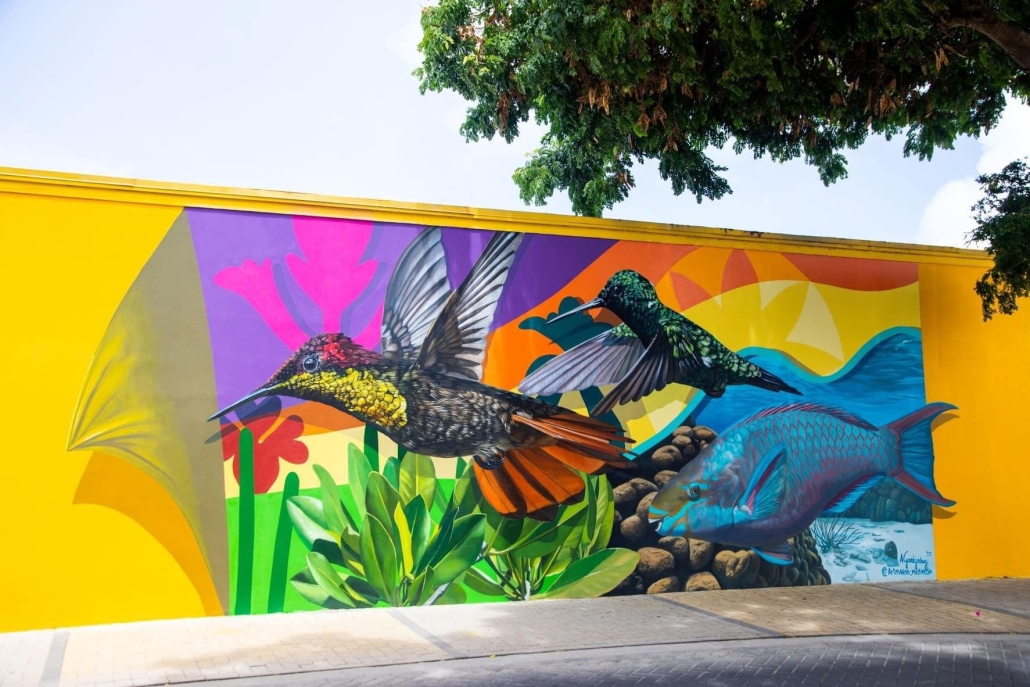 Painted by the talented Armando Goedgedrag, one of Aruba’s many outstanding painters, this mural is one of a kind.

Because of the intricate detail of this mural, it took Armando over 3 weeks to complete it.

The mural is located at the end of the main street in San Nicolas.

This bright and colorful mural features the flora and fauna you will see all around the island.

In the right bottom corner, you see a gutu (also known as the blue parrot fish), often seen when snorkeling at the Palm Island.

You also see an orange tailed bird, locally known as the Blenchi Cora (Ruby Topaz Hummingbird). Next to the Blenchi Cora, you see the Blenchi Berde (Blue Tailed Emerald), another local bird found on the island.

The mural is mainly painted with yellow and orange paint, symbolising the sun (and sunrise) in San Nicolas, better known as Sunrise City.

Also displayed on the mural are floral symbols that are used as decoration on the traditional houses in Aruba.

The beaches and green nature is also on the mural.

Make Your Promise To Aruba

Aruba Tourism Authority commissioned local artist Armando Goedgedrag to paint this mural in order to promote their new awareness campaign towards visitors and locals, to make a promise to protect the islands nature and environment.

What’s your promise to Aruba?

Here’s a list of promises made by visitors from all around the world until now, according to Aruba Tourism Authority’s website:

You can also make a promise to Aruba when you visit, and help keep the island beautiful for the rest of generations to come after you.

The “My Promise” Mural Challenge

If you are on the island and you want to make a promise to protect Aruba, do the My Promise Mural Challenge.

Take a picture by the mural and show Aruba’s nature and your promise to the world. 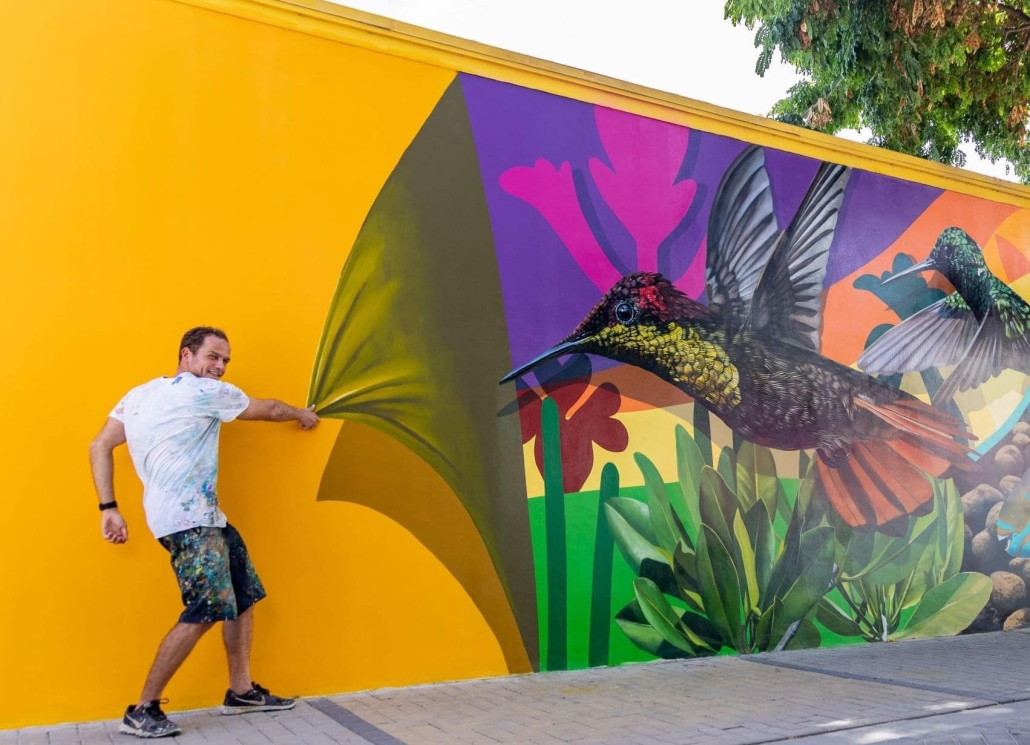 If you’ve been to Aruba before, you remember the intersection at Palm Beach, between McDonald’s and Wendy’s.

That intersection is gone.

A new large roundabout is being constructed here now, and it’s almost complete.

At the moment, only half of the roundabout is open for traffic, which is the lane on the west side of the roundabout, the road from Ritz Carlton to Oranjestad, or Palm Beach towards the hotel strip.

The east side of the roundabout is still under construction.

On August 30 – 31, the roundabout will be completely closed, to lay the last and top layer of the asphalt on the new road and finalize roundabout construction.

It is expected that the roundabout will be open on September 1, 2022.

If you are driving near Palm Beach before the roundabout opens officially, take note of the road signs with alternative routes around this area.

Driving around Palm Beach will be safer and easier after the roundabout is completed.

If you are looking for a car rental in Aruba, check out our options and ask us for a quote in our car rental page. 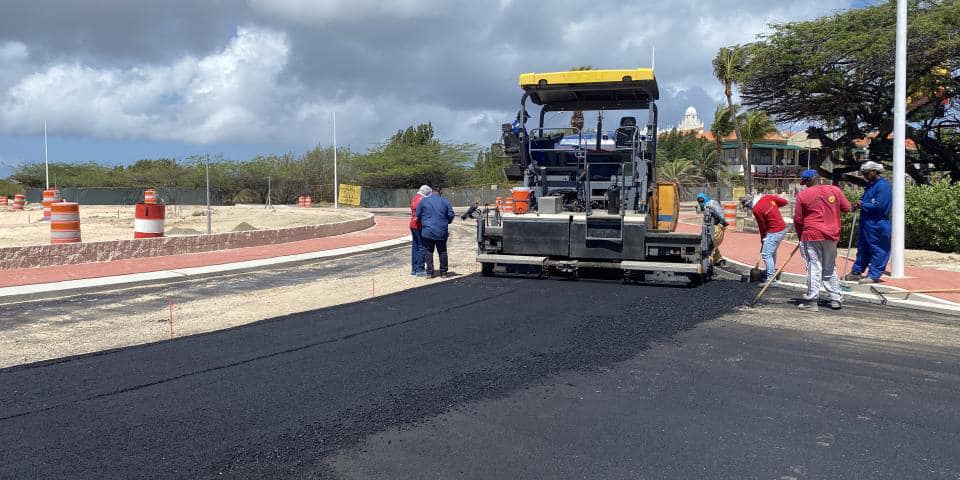 What are early bird specials?

Early bird specials are unique discounts offered by restaurants on their menu for diners who like to eat early.

Start with an appetizer.

You can choose between the soup of the day or caesar salad.

The main dish is the “fish of the day” served with chimichuri sauce, french fries and pepper sauce. Or you can enjoy a savory 4oz lomito (steak) well done, or just the way you prefer.

The last dish on the early bird special is dessert. 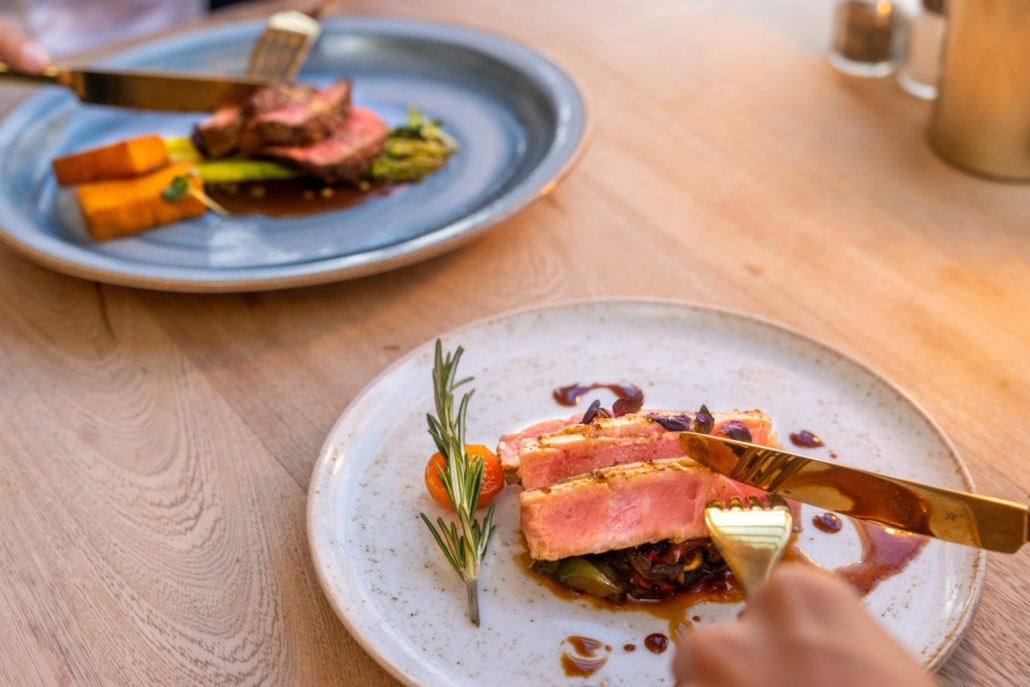 Moving To Aruba is Everyone’s Dream

Living in the Caribbean is a dream that most people have, and some actually end up making the dream come true.

Waking up to the beach view and beautiful nature is priceless.

Island Origin Magazine, a Caribbean-American magazine that features travel, lifestyle and culture, listed Aruba as one of the best islands to live, if you’re thinking about relocating to the Caribbean.

Do you dream of living the island lifestyle? 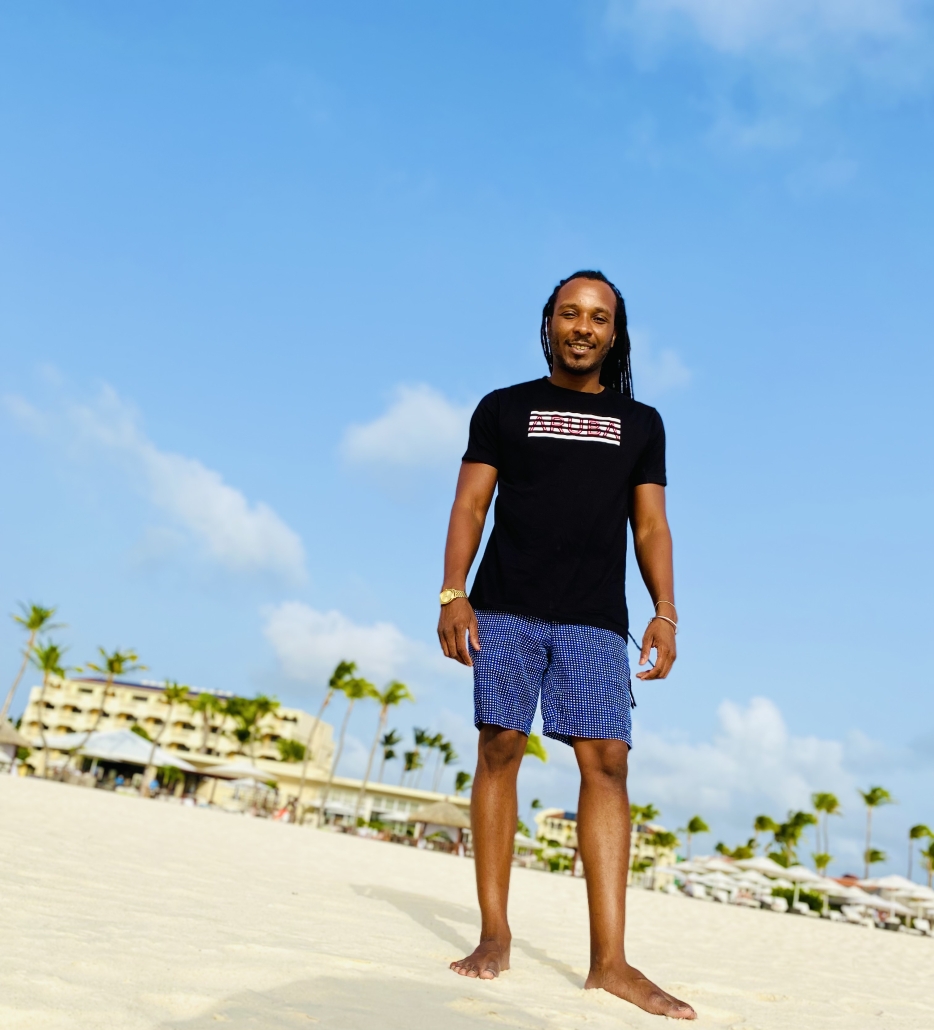 Enjoying the island life with a nice walk on the beach.

Living in The Caribbean

Other islands mentioned by Island Origin Magazine that are also a good option to live are Curacao, Barbados and The US Virgin Islands.

What makes Aruba the ideal place to live in?

Besides the happy people, beautiful beaches, amazing food selection, and surrounding nature, Aruba is one of the most modern and developed islands in the Caribbean.

There’s plenty of land on the island to build your dream home.

The island also has a bright future ahead, as the Government is investing in the tech industry, growing it’s circular economy, and plans to transitions to green energy by the end of 2050.

Agriculture is also being promoted, as locals are encouraged to start growing their own vegetables and fruits, as the island tries to rely less on importing food from away.

The Casino at Ritz Carlton is giving away $130.000 in prize money every weekend during August and September 2022.

To participate in this cash giveaway, visit the casino on Friday, Saturday and Sunday (August and September 2022).

You can also win $60 in slot machine credits playing at the casino after midnight.

Aruba’s utility company announced a request for expression of interest in search for a partner to build a new wind turbine park on the island.

The new project is part of the Government’s strategy to make Aruba completely dependent on renewable energy by 2050.

The company that wins the bid, is required to design, build, own, operate and maintain the wind turbine park. This also includes supplying of the collected energy to Aruba, through the local utility company for the duration of 15 years.

A 10 wind turbine park is already in function near the south east part of the island, known as, Vader Piet. Each of these wind turbines has a capacity of 3MW and are producing almost 15% of the islands energy.

Experts are continually looking for additional opportunities to provide the local community with reliable, affordable and sustainable energy.

The American Monster Truck Association is preparing for a magnificent monster truck show on the island.

The event is called “Caribbean Monster Truck Shootout”, is promised to be one of a kind.

American Monster Truck Association aims to give shows around the Caribbean, and now Aruba is next on the list!

There’s even a surprise act by the one and only Transformers, Bumblebee and Optimus prime.

If you have any questions about Aruba regarding: