Once a week, I make a recap of the most relevant and recent Aruba news updates in English. If this is your first time reading my newsletters, welcome!

If you want to keep up with what’s happening on the island, sign up for my weekly newsletter.

Local Fishermen Concerned About Their Future

The department of environment protection wants to introduce a law, which is a list of prohibited fish species that local fishermen aren’t allowed to catch, but the fishermen don’t agree with it!

After a meeting in the parliament the minister of environment protection promised the local fishermen that the law won’t be accepted by the government.

The local fishermen don’t trust the verbal agreement  by the minister, so they took matters into their own hands by starting a signature campaign seeking support from the Aruban community to stop this law from being implemented.

According to the local fishermen, the list of prohibited fishes is controversial, because it contains species of fish which they sell to the local community in order to make a living. The list also includes a fish called “buni” which they use as bait, which means they practically can’t fish anymore, because they don’t have the “right bait”.

They are demanding a clarification by the department of environment protection why fish species, such as “buni” and many others appear on the list, while they are far from being extinct, according to them.

The president of the local fishing organization explained the concerns they have towards this new law during a press conference and invited everyone who loves fishing to attend a general meeting on October 10, 2017 at piedra plat entertainment center to discuss the current situation.

“We are all surprised by the introduction of the new law by the department of environment protection, without consulting us. They don’t realize what type of impact this decision will have on our economy and  social life” said the president of the local fishing foundation during the press conference.

Although the law hasn’t been officially implemented yet, they already feel the effect of it by local authorities like the coastguard.

The goal of the signature campaign is to support a letter of appeal to the government regarding the new law by the department of environment protection.

If so, join the Bucuti Yacht Club for their annual bill fish tournament.

For more information and rules about the bill fishing tournament call them at +2975823793.

Aruba Airlines announced their new flights to Curacao and Bonaire.

Starting on October 23, 2017 with 2 flights everyday. There will be one additional flight on Tuesday and Thursday.

Aruba airline invested into a new airplane, a model Q300 (DH8-300) with a capacity of 50 people, to fly between the ABC islands.

The exterior of the airplane, has the same design as their Airbus A320, which is completely wrapped in the Aruban flag!

If you want to visit Bonaire or Curacao after enjoying Aruba, call the Aruba Airlines office for more information at +2975838300.

Want to rent a car in Aruba? Ask me for a car rental request!

Aruba’s national park started a camp called “Arikok Junior Ranger Camp” to teach kids how to protect and conserve the flora and fauna in Aruba.

They kicked off the camp with a project called “plantacion di mangel”, which means planting mangroves in English.

The governor of Aruba joined the junior rangers as a surprise guest and helped them plant mangrove seeds all over the area of Spaans lagoon.

During the first day of the project they managed to plant 36 mangrove seeds, that will grow into big and beautiful green mangrove trees in the future.

Prinses Beatrix visited Spaans lagoon a few months ago to officially transfer the area of under the protection of Arikok.

Spaans lagoon is a nature area in Aruba that has a high percentage of biodiversity, because of the various types of flora and fauna. It’s 1 of the 16 nature areas that is officially under the protection of Arikok, the other 15 nature areas still have to be officially transferred to Arikok by the government.

Over 800 volunteers cleaned up the beach shores, during the Aruba Reef Care Project.

The reef care project is an annual event, which locals and visitors volunteer to clean up the beaches in Aruba.

Different organizations and companies gathered up their staff and gave Aruba‘s nature a helping hand.

Volunteers cleaned the beaches from Arashi, Malmok, Eagle Beach, Palm Beach,Mangel Halto, Baby Beach and the beaches on the southern coast of the island.

A lot of garbage, especially plastic packaging from different products were removed from the beaches, which would of ended up in the water, forming a danger to the fishes and other animals in the sea.

The reef care project ended with a celebratory event and every volunteer received a certificate by Aruba Reef Care Foundation. 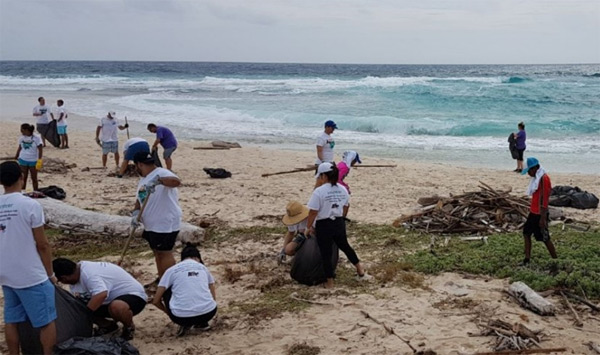 Volunteers cleaning up the beach.

There are a total of 8 post stamps in this series and they are beautiful.

All the post stamps have been designed by local artist Rogelio Montero.

Take a look at the post stamps and what they represent…

This post stamp represents the red anchor and beautiful beaches in Sero Colorado. According to locals it symbolizes the island’s heritage being anchored.

The red anchor is a part of Aruba’s history and is a must see landmark for visitors and locals alike.

In the background, you can see a mountain, called hooiberg, which is also a popular landmark on the island. Hooiberg is over 541 feet high.

This post stamp shows one of Aruba’s natural wonders, Casibari. It’s a formation of huge boulders, surrounded by flora and fauna.

Casibari is one of Aruba’s natural wonders, because no one exactly knows how such a formation came about on a dessert like and fairly flat island.

This post stamp has one of the most memorable shipwrecks on the island, the M.S. Antilla.

The ship crashed decades ago near Malmok, and was never removed.

During the years the ship got covered with corals and surrounded by different types of tropical fishes, making it one of the popular spots to snorkel and dive on the island.

This post stamp represents the panoramic view of the area known as Hushidibana.

Take a closer look to notice the cactuses, a prikichi (native bird) and the california lighthouse in the background.

This post stamp represents a piscado, (which means fishermen in English), as he prepares to go fishing early in the morning.

This post stamp shows a fisherman throwing his net into the water, which is a old tradition here on the island by fishermen.

This stamp shows a child enjoying a sunset from above while sitting on Hooiberg.

Every sunset on the island is different and beautiful.

All stamps are for sale at the post office in Oranjestad, San Nicolas and St.Cruz.

The food truck festival is a new addition to the Love Festival which is taking place on 3, 4 and 5 November 2017.

All food trucks on the island will be stationed on “music boulevard” which is close to the venue “harbor arena” where the love festival will take place.

You can taste different type of platters from Aruba, Mexico, Italy and Netherlands.

Entrance to the food truck festival is free, as well as for love festival goers and the general public.

Want more articles? Read Must Have Beach Items in Aruba

It isn’t easy finding recent Aruba news in English on the internet. At Vacations By Aruba we are proud to have our free newsletters, however, there’s a lot of costs for running the website!

If you enjoy reading the weekly newsletters, please make a donation of your choice to help pay for website maintenance fees or just to “buy” me a beer for my hard work, because nothing great was ever invented by drinking water 🙂

Click on the amount you wish to donate and you will be redirected to a secure pay-pal page.

Sign up for my newsletter to get more recent Aruba news straight to your email for free.

If you sign up today, I’ll send you my “Aruba on a Budget” eBook, filled with money saving tips as a gift via email.

Temporary Crisis Levy Tax in Aruba As of July 1, 2018 Explained