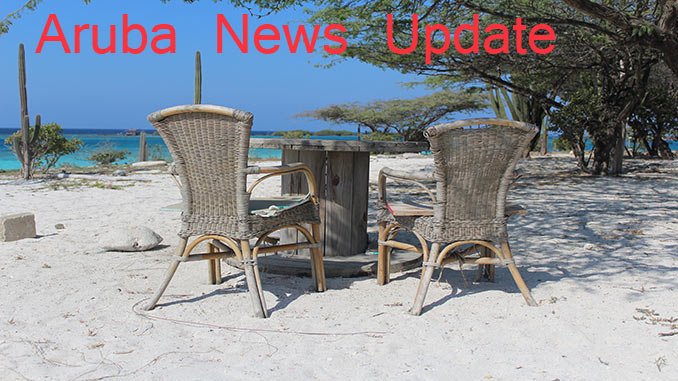 It’s that time of the week again where I spread some positive island vibes in your way with some Aruba news update.

Aruba is your home away from home…

And knowing whats going on in paradise is good a feeling.

I have to admit it’s hard keeping up with news in Aruba if you just don’t understand the local language.

This is where my Vacations By Aruba newsletter comes in very handy!

You get the latest Aruba news update straight to your email.

You can sign up for the newsletter at the end of this Aruba news update article.

The recent comments I have received from my loyal readers is that I’m doing a good job and that I should continue keeping them informed.

A new hotel in Aruba

Last year the Minister of tourism announced that Aruba will get another hotel.

Last week a ceremonial ground-breaking event took place next to the airport, where the hotel will be constructed.

The airport hotel will be perfect if you’re using Aruba as a travel hub.

You can stay at the airport hotel instead of going to the hotel area just to stay a night or a couple of hours.

The airport hotel is also going to function as a business center.

For example, you can rent a room to have a meeting with your business partners. Or rent an office space for a few hours to finish up on projects.

The airport hotel is a 30 million dollar investment and will take 18 months to complete.

I think this hotel is a great idea. Because it’s different. It will cater to a lot of business travelers and sustain Aruba’s Tourism.

The hotels in the low and high rise are going to have more rooms available because of this move.

Aruba’s lottery had the biggest jackpot in history last year.

Representatives of Aruba lottery said the winning ticket was bought in Santa Cruz by a vendor named Lucky Mack.

However the winner hasn’t claimed the prize yet.

They have exactly 90 days to come forth and claim it.

I wish I had that ticket!

The things I would do with the money…

Electric cars for sale in Aruba

Last week Garage Centraal (a car dealership in Aruba) displayed their first electrical car for sale in their showroom.

The Prime Minister of Aruba, Mike Eman, was present and revealed the new Hyundai Ioniq to the public.

This was a significant moment in the history of Aruba.

Because the Minister has been stimulating car dealerships to start selling electric cars since 2012.

The growth of electrical cars in Aruba is not big.

Maybe after the introduction by Garage Centraal things will pick up.

Now it’s time for the other car dealerships to start selling electric cars.

Would you drive an electric rental car in Aruba?

The Beach Between Divi & Tamarijn

The beach between Divi and Tamarijn was severely damaged by Hurricane Matthew.

Everyone’s asking for recent pics from the beach at Divi, so they can be relaxed about their upcoming vacations.

However it seems that it’s raining a little too much on Aruba after the storm.

The big waves between Divi and Tamarijn are causing damage to the beach.

Taking out some palapa huts.

The damage reported by the resort is over a million dollars.

But Divi, Dienst Openbare Werken and Aruba Tourism Authority have partnered up to repair the beach and come up with a permanent solution.

DOW proposed that a study be done to monitor the behavior of the beach.

How the beach erodes, what season of the year it happens and how the beach grows back naturally.

With this data they can simulate the process and prevent any kind of future threats to our precious beaches. The entire study is expected to cost about 500 thousand AWG ($285.714). And will take a year to complete.

It’s a good investment of time and money to preserve our beaches.

The Divi & Tamarijn in Aruba are well known for maintaining their hotels.

Last year the Tamarijn resort renovated the lobby, added a new restaurant, built a new terrace and pizza bar. The rooms are refurbished. All the balconies are looking nice with amazing views.

Renovation is still taking place and the hotel is practically full of visitors.

There’s also talks into building a gym at the Divi Links.

Can you imagine overlooking the beach while you get in shape?

Aruba’s coast guard is continuing to do a good job of finding and catching illegals in Aruba.

The coast guard showed up without notice by some construction workers this week.

During the day last Friday, they went to a site near Palm Beach and caught various people without the right documents to be in Aruba.

They arrested everyone who was not properly documented.

One of the biggest volunteer events is going to held on 10/11 of March.

This event is called Aruba Doet (Aruba Does).

It means Aruba’s own people doing volunteer work to fix places and help people in need.

Like painting schools buildings. Fixing playgrounds. Spend a day with elderly people. Clean up the beach and more.

If you’re in Aruba in March and want to help clean up the beach, remember to subscribe as a volunteer.

A weather update for this week…

It has been raining constantly the last 2 weeks here in Aruba.

Not constant rain, but every day it rained for a while.

Some days it was very hard rain and the other day cloudy and drizzling.

The director of Meteo Aruba said that it rained more than usual in Aruba.

However, these last couple of days were very good.

Today the sky is clear and the sun is bright.

I checked the early afternoon scan from Aruba weather report and it shows clear skies over Aruba.

No significant signs of rain expected, so I think we will have dry conditions throughout this week. And hopefully the next one also.

Did you enjoy what you read?

If so join the Vacations By Aruba Newsletter to get instant emails for Aruba news update. Travel tips and special offers.

If you sign up today I will send you my free Aruba on a Budget eBook as a thank you gift via email.

The eBook has tons of tips you can use to save money during your vacation in Aruba.

Government Bans Use Of Cellphone While Driving in Aruba
25 replies