Once a week (on Sundays) I make an Aruba news report with the most relevant news on the island.

This newsletter is for you, if you’re looking to keep up with what’s happening on the island (in English free of charge).

Why is the only newsletter about Aruba in English free? Because it is supported by readers who donate to the website that cover all the website costs (maintenance, hosting etc.)

Before you read on, just bask in this amazing view of Aruba….. 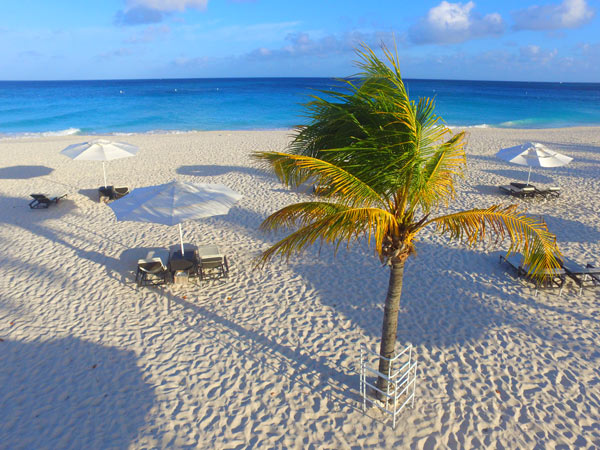 Did you know that one of the most popular travel blogs named Aruba the numero uno island for family vacation?

According to Caribbean Journal – “Aruba, the Dutch Caribbean’s tourism capital has managed to create what is right now the most family friendly destination in the region”.

The news was a proud moment for all of locals, and people who work in the tourism industry.

Aruba won the award because of various factors, such as our airport (that is being renovated at the moment), the island’s infrastructure, transportation, the variety of available flights to Aruba, our beaches, flora, fauna and the friendliest people you’ll ever meet.

Enough reasons for you to (re)visit Aruba with your family.

Aruba is not only famous for its beaches, but also for the trade winds – surfers from all over the world seek Aruba for the breeze.

Even Sir Richard Branson decided to kite surf near fisherman’s hut during hi winds (kite surfing competition), while on a business meeting on the island to explore Aruba’s sustainable projects including the new sunrise solar park in San Nicolas, solar parking lot at the airport, smart community and vader piet (a place with big windmills).

The well known businessman likes to kite surf, and think it’s one of the best sports in the world – and Aruba having such great trade winds makes Aruba the go to island in the Caribbean for him. 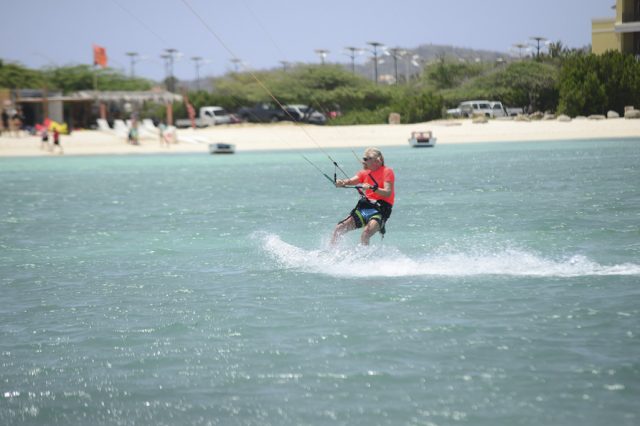 Renovations at The Mill

The minister of tourism was invited by the new owners of The Mill to see the ongoing renovations.

Yes, if the news is not known to you, it’s true – The Mill is being renovated. 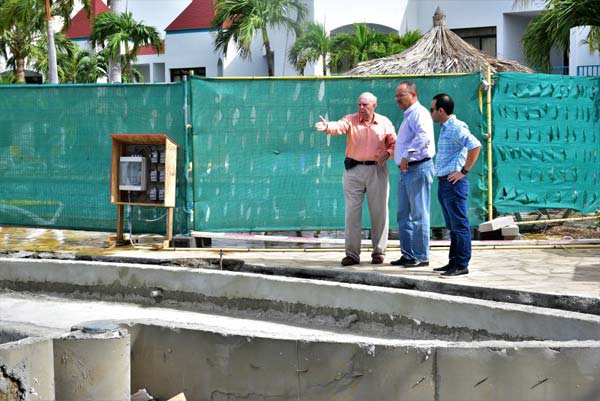 The owners of the resort and the minster of tourism.

The Mill is investing over 10 million dollars into the project.

They’re going to renovate everything from the lobby, pool, rooms and restaurants.

After the renovations The Mill will be re-branded as Marriott Courtyard.

If the price of gasoline on the island is of interests to you, because you want to rent a car – you will be happy to know that the price for fuel dropped 4.1 cents.

At the moment one liter of gasoline will cost you 173.2 cents at the pump.

Use this to calculate your gas budget in Aruba.

If you want to rent a car on the island, but don’t know which company to rent from – click here to send me a car rental request via email, and I’ll give you a quote for any car you like and reserve it for you personally.

The government is going to introduce a new paid parking concept to replace the wheel boot.

Many people have different opinions on the introduction of paid parking on the island, some think it was a good decision, because it created space and order, but other people say it’s bad for the downtown area.

Not too long ago did the owners from the downtown stores manifest against the paid parking and the government decided to eliminate the wheel clamp immediately after the manifestation.

The removal of wheel clamps doesn’t mean you don’t have to pay for parking, because those who break the parking rules will get their car towed.

The government is also aware of the parking situation for visitors – during an interview he mentioned that they’re looking for other options for visitors to park without worrying to pay for for it.

The current parking situation counts only for the downtown area of the island, the hotels and beaches have free parking 24/7.

The organizations and volunteers who spent money to clean up the oil spill have to report all costs on paper that they spent on the beach clean up.

They have to deliver it to the government who will in turn make one main claim and send it to those responsible for the oil spill in Trinidad.

The date for each organization and volunteer to deliver their cost list is August 25, 2017 – after that the government will finalize all papers to send in.

It’s not clear how much the total claim will be, because none of the organizations or volunteers disclosed how much money they used during the beach clean up.

Some beaches on the north coast are still suffering from oil patches that are drifting towards the island and stick to the rocks.

According to oil spill experts, the oil patches stuck on our rocks should be left alone – oil is a natural product and nature will do its own work to restore the damage as time goes by.

Popular Article – 15 Beach Must Haves in Aruba (click to read)

The minister of energy recently declared during an interview that CITGO and the government signed an agreement to transfer the money necessary to rehabilitate the refinery.

How much money are we talking about?

This hasn’t been clarified as of yet, but I’m sure it’s a mega amount.

CITGO is waiting on certification for foreign exchanges from the central bank of Aruba so they can transfer the funds necessary to finance the rehabilitation of the refinery.

According to the minister, after the money is received we will notice more manpower in the refinery.

At the moment there’s about 400 people working on the renovations of the refinery, however at the end of this year this number will increase to a 1000 workers.

The first phase of the project should be completed at the end of 2018 – this means start up of the first half of the refinery, which will produce 125 thousands barrels per day.

After the first phase is done, they will move on with the other half of rehabilitation and the refinery will produce 210 thousand barrels per day.

The new refinery will be as big as the previous ones on the island (Valero, Lago) – the difference is it will function as an up-grader to make different crude products which in turn will be sold internationally.

According to the director of Aruba’s hospital – the patients are going to be transferred to the new building because they they need to start renovating the old one.

The hospital has been expanded with new buildings.

All equipment and machinery are ready to use, just some IT aspects are missing and still need to be finalized before the patients make the move.

All nurses are going to take an exam called “training for patient experience” to keep up with the international medical standards (there’s already 4 local neurosurgeons that were recognized in Aruba, and more students who studied medicine are returning).

The government invested a lot of money into creating the new hospital buildings and in renovating the old one in an effort to better the medical care on the island.

There are talks in the parliament about medical tourism, where visitors from all over can come to Aruba and seek medical attention for a better price than back home.

New Cars for the Navy

There’s about 33 new military trucks being shipped for the navy in Aruba.

All vehicles are being shipped at the moment via Curacao – 12 of these new trucks are already on their way to Aruba. The rest of them should be shipped this week.

The trucks will be used for training, humanitarian missions, accidents, floods and in combat (if ever necessary).

Sport is very important in Aruba.

You can see the fruits of our labor with all stars in baseball like Xander Bogaerts.

There’s more all stars to come in the future, because our Aruba’s little league made it very far during the Caribbean little league series held in Antigua.

The players managed to win the sub champion title after losing to Santo Domingo 8 – 5 during the championship game.

We’re proud of our little league team, because they put Aruba on the map internationally in regards to sports.

The winners of the series (santo domingo) will represent the Caribbean in the little league world series 2017.

We’re proud of our athletes for making it this far – congratulations.

Government Bans Use Of Cellphone While Driving in Aruba
0 replies