Once a week (on Sundays) I make an Aruba newspaper recap in English with news that’s relevant to you.

The newsletter is free thanks to generous readers that donate money to cover all website costs (maintenance, hosting fees etc.)

Bushiri resort is finally being dismantled.

Both the prime minister of Aruba and the minister of infrastructure expressed their gratitude during a ceremony for the dismantlement of bushiri beach resort.

You may be wondering what the government is going to build here now….

There’s plenty of rumors going around that a new hotel and mall will be constructed in this area, but the truth is that the government plans on making it a public beach with a recreational area for sports, art and culture.

The government gave the company in charge to dismantle the bushiri beach resort 55 days to complete the job. 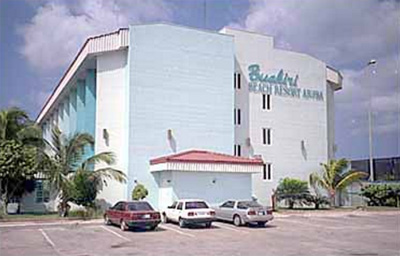 The green corridor project should of been finished on August 14, 2017. However, the company in charge of the project (ODINSA C.C.) ran into some issues, delaying the project.

The delay started when a contractor damaged an underground 60 KV electric cable from elmar (electric company).

Once the new bridge is open for traffic, the existing bridge next to the new one will be converted into an area where locals can walk and cycle on.

Want to rent a car in Aruba? Click here to contact me for a free car rental quotation. 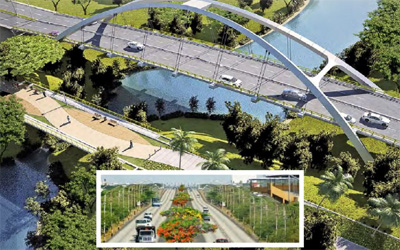 This is how it’s going to look!

The sanctions against Venezuela by the trump administration doesn’t have any negative effect for citgo in Aruba.

One may think that these sanctions may have a negative effect on the refinery situation, since CITGO is partly from Venezuela.

However, the minister of economy mentioned during a speech that presidents Trumps sanctions against Venezuela will not hinder the rehabilitation of the refinery of Aruba.

Red cross Aruba celebrated their anniversary by doing what they do best – helping the community.

The health day was a successful one with the contribution of different organizations (Mary Joan Foundation & Wilhelmina Kankerfonds).

Anyone who wanted to know the state of their health at the moment was welcome.

A health bus was one site with doctors that offered free examinations (blood pressure, cholesterol, sugar, weight and help with other medical issues).

The government is creating a list of protected animals and trees.

Aruba has made what the dutch call a “landsbesluit” (country decision) to protect various species of flora and fauna o the island.

For example, the famous divi divi tree on eagle beach that has been photographed millions of times also belongs to the lists of protected flora and fauna.

It’s been about a week since the government announced this landsbesluit.

This week the prime minister announced during a press conference that his cabinet will sit with local fishermen to determine which fishes should be added to the list.

In many countries there’s over fishing, however Aruba doesn’t have this problem. However, there’s certain fish species that are special to the island, that we rather not risk losing them (for example the parrot fish, known as gutu between locals).

Over 60 new policies have been sworn in the police force.

They had to take an oath to uphold the law in front of the minister of justice and police commissioner.

With the addition of these new policemen and women, the total police force of Aruba has about 700 cops.

Now there’s more blue on the road to protect locals and visitors on paradise..

Congratulations to all the men and women who decided to help and serve the local community.

The members of Kiwanis club palm beach did a clean up at a kids playground at surfside beach.

The area near Neptali Henriquez playground is beautiful, but the amount of grass has obstructed the view of surfside beach.

That’s why the members of Kiwanis club of palm beach approached the owners of neptali park to help clean up the area, and they accepted the invitation with open arms.

The beach area near the playground is clean and the view to the beach is beautiful!

The idea behind it is called “hand on project”, but the goal wasn’t only to clean up the beach, also to inspire new ideas for activities for youths on the playground. 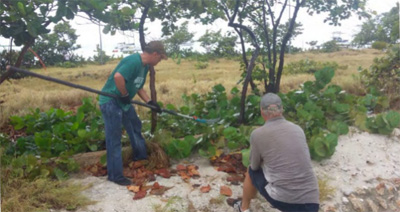 Hands on clean up at surf side beach.

On August 25 – 26, 2017 there’s going to be an international pro-am golf tournament on the prestigious golf course of tierra del sol.

The golf tournament is popular among golfers from latin america, united states, Europe.

It’s going to be the 23rd time that Aruba is hosting this pro-am golf tournament.

A total of 28 teams will be participating this year (one team consists of 5 players, 1 professional and 4 amateurs).

Aruba’s women soccer team will be participating in a competition to classify for a place in the FIFA U-17 (under 17 years old) championship.

The team will be travelling to St.Lucia to represent Aruba in a classifying FIFA competition.

According to team captain (Isabelle Netto,) they started training 2 times a week since the month of March. They not only got physical training, but also had to prepare mentally for the upcoming matches.

They have to win all their games in St.Lucia to qualify for a chance to participate in the FIFA championships in 2018.

The minister of public health and sports was at the airport to wish the girls all the best.

The two new slot machines at Marriott stellaris casino are buffalo grands – they are award winning machines and very popular in casino at las vegas.

Since these two machines have been installed, locals and visitors are liking them, because of the payouts. The new slot machines offer multiple progressive payouts starting at $10.000 and other bonuses.

Within a week of being installed, slot players already managed to make the machine pay out!

However, no one won the big progressive jackpot as of yet, which is over $12.000 at the moment.

If you want to win the big bucks, you need to wager at least $3 per spin of the buffalo grands golden reels.

Are you a gambler? If so try your luck at the Marriott stellaris casino!