Once a week (on Sundays) I make recaps of Aruba local news updates.

Elections are just around the corner (September) – if you read the local newspaper, you’ll only notice political propaganda. One has to read between the lines to find out what’s happening on the island, outside of politics.

This Aruba local news update will get you up to speed with what’s been happening on the island recently….

Just when we thought everything was coming to an end with the oil spill that washed upon our shores from Trinidad a few weeks ago – another oil spill happened in Aruba, but this time it didn’t have the same negative impact like the previous one.

It’s estimated that 1 barrel of oil has spilled into the ocean during a routine work by CITGO employees on a reef near Comandeurs Baai (in the district of Savaneta).

The workers from CITGO immediately notified the oil spill experts at the refinery, who managed to contain the oil spill and remove it from the ocean.

A section of Aruba’s airport is going to be renovated in the following months.

What exactly are they going to renovate?

The plan is to fix two of the parking spots for airplanes, add a new fuel hydrant system and building 2 new bridges to accommodate passengers on larger planes.

The project is set to be finished in December, 2017 and is projected to cost around 7 million dollars.

If you’re visiting the island soon, be aware that some gates are going to be closed due to the renovations.

The minister of telecommunication gave mio until the end of June, 2017 to pay their licensing fee’s. If they didn’t show up with the money on time, he promised to revoke the company’s license.

June is already gone, it’s July now, and it look like mio is closing – for real.

How long is it going to take? The minister didn’t say a time frame….

One thing is for sure, all of mio’s clients will be disconnected from the network and the employees won’t have a job anymore.

What’s going to happen to the customers?

I’ve heard that there’s a possibility that the government is going to split mio’s customers into two groups and award them to the two major phone companies in Aruba (Digicel & Setar).

There’s a total of 6000 mio customers on the island.

What’s mio saying about this?

According to mio, they shouldn’t be charged the same licensing fee as Digicel or Setar, because they are a smaller company compared to the other two phone providers – they can’t afford to pay the million dollar licensing fee.

In my opinion, mio’s claims are understandable, why should they pay the same licensing fee that a big company pays, if they don’t have half as much clients as they do.

Phone providers in other countries are being charged licensing fee’s according to how much customer’s they have, but the laws are different here on the island – unfortunately for mio.

The licensing fees are fixed, and this was one of the company’s disadvantages.

What’s new in these cars?

These new pick ups are part of a fleet of new police cars on the island – a few weeks ago the police received two Rav4’s.

When I drive around the hotel zone I always see these new police cars patrolling the area – it definitely increases the visibility of the police around the island and makes their jobs more effective.

The Bridge Is Almost Done

This week the prime minister inspected the final works being done on the bridge – joined by the minister of infrastructure – they witnessed as the workers added the first layer of asphalt on the new bridge.

According to the minister of infrastructure, the green corridor is going to bring a significant change and safety to Aruba’s traffic system.

For the first time in the island’s history there will be a 4 lane road (2 separate roads next to each other) to both directions from the airport until pos chiquito. 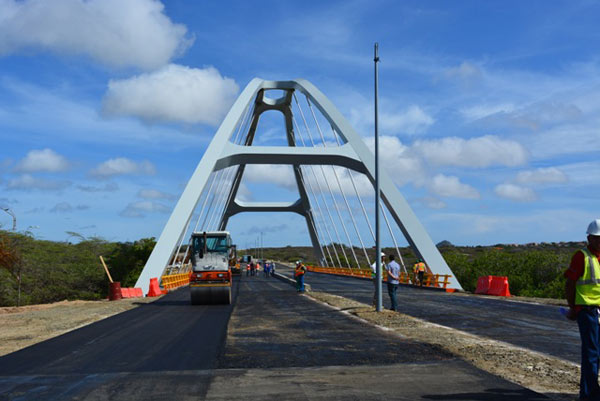 The police doesn’t have the right to control illegals anymore, but they want the authority back to ask people for their documents and find illegal people on the island.

The government that ruled 3 terms ago decided to take away the rights from the police to check if someone is illegal or not.

Why did they do that? They didn’t let the public know the reasons behind their decisions back then.

Now the police’s hands are tied, because they can’t spot check for illegals anymore, they have to leave this to the department of foreigners.

The decision that was made over 10 years ago has certainly crippled the effectiveness of the police in regards to controlling for illegals.

At the moment, there’s talk in the parliament to update this law to give back the police the authority to control for illegals on the street.

Taking Out Taxes From Public Transportation

They want to implement this new rule to promote and sustain a better public transportation.

If this law passes, you will be paying less for taxi or bus.

Maybe they should also adjust taxes for rental cars? What do you think?

Click here to fill in your car rental request and I’ll email you a quote within a few hours.

The biggest jackpot in Aruba’s history has been won this week.

There wasn’t only one winner, but a bunch of them. The first winner is a young man (in his early 20’s) – he won a cool 700 thousand dollars, which is over a million guilders in Aruba.

He bought the winning ticket, with a “loco draw” this means the machine just randomly picked his numbers.

The other winners are a group of friends who all chipped in to buy a ticket and ended up winning 1.4 million dollars.

People came from all over the world to see artist like Juan Luis Guerra, Gilberto Santa Rosa, Maluma, Silvestre Dangond, and Zion & Lennox!

I didn’t go to this two day concert, but I did pass by to feel the vibes, and let me tell you on the first night with Juan Luis Guerra on stage, the place was full.

Aruba features different festivals during the year, from various music genres, turning the island into one of the top spots to visit for a festival.

Every Sunday I post a weekly recap of important Aruba news – for free!

I invest my personal time to make this newsletter available for you and  I have a few monthly costs to run this website.

Join my newsletter today and I’ll email you my “Aruba on a Budget” e-book as a gift….