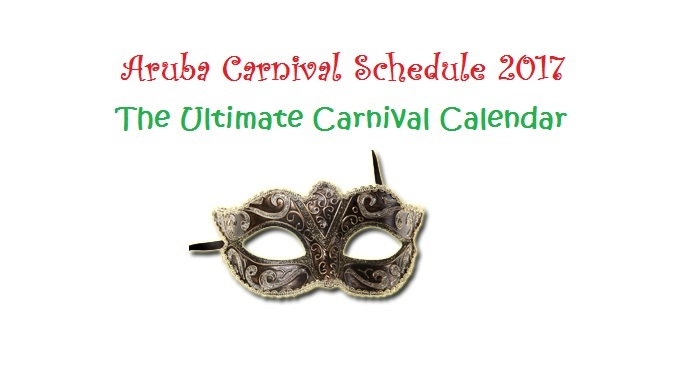 Are you looking for all of the dates for this years Aruba carnival season? Well, this is the ultimate Aruba Carnival Schedule 2017.

Carnival in Aruba is one of the most liked seasons in Aruba.

This year is the 63rd edition of carnival in Aruba.

On this day the key to Aruba’s carnival will be given to a selected Prince & Pancho (an Aruban name for two young men who open all carnival parades).

This event promises to be full of laughter, because all participants have to entertain the crowd with a show about Aruba’s carnival in a funny way.

So you will be hearing jokes and see hilarious costumes throughout the night.

Balloon parade is a children parade in San Nicolas.

You will be seeing kids wearing cute costumes. There will be colorful balloons. Watch them jam and dance to music.

Aruba’s balloon parade promises to be a beautiful display of our children in Aruba.

If you happen to have kids take them here!

This is the biggest music festival during Aruba’s carnival season.

The islands best musicians battle each other live on stage on this day and for 2 other consecutive nights (1-2 February) at pre-finals.

The winner will be elected on 4 February at the Grand Final Caiso & Soca Monarch.

What can you expect at this event?

The best local foods and snacks. The newest carnival music. And amazing ambience.

This is the night the Queen of Aruba’s carnival will be elected.

Her role on this day forward is to lead all carnival parades. And she also has the duty to represent Aruba abroad during the entire year.

Hebbe Hebbe is a go to event if you like to party at night.

You can expect to hear Aruba’s best carnival tunes.

There will be local snacks, drinks and great vibes available all in one place.

Jouvert morning is the only parade during midnight (and morning) hours.

The carnival event is only for those who can get up during midnight.

The dress-code on this morning is definitely pajamas!

Want to see spectacular artwork made of lights? Go to the lightning parade.

This carnival parade promises amazing artwork on the costumes of carnival groups. All the carnival music trucks are decorated with TV screens and disco like lights.

Lightning parade is going to be a night to remember after this years carnival season.

If you enjoyed the children’s parade in Noord. Or happen to miss out on it – this would be your chance to see it again.

On this night a scarecrow like mannequin will be burned.

This is an traditional act every year in Aruba during carnival in Aruba. Marking the end of the children carnival parade and the carnival season until now.

This parade is one of the two biggest parades during the carnival season in Aruba.

On this day you will see all carnival groups doing their best to show off there costumes, road pieces and dance moves.

This is the parade that you can’t miss out on. It’s going to be the biggest carnival parade in the Aruba carnival schedule 2017.

This event boasts the best tunes, costumes and the best carnival vibes.

If you could only go to one event during Aruba’s carnival season – it’s this one!

It is our culture and way of life to say good bye to yet another carnival season by burning the one and only King Momo.

After more than a month of carnival your body needs at-least a full day to rest. This is the one day locals get to rest and restore the energy lost during the dancing, mingling with friends and family in Aruba’s hot sunny weather.

Did you enjoy this Aruba carnival schedule 2017?

If so please share it with your family, friends and social media.

Did you enjoy this carnival schedule and what you’ve read in it? Then you should sign up for the Vacations By Aruba Newsletter.

Signing up the my newsletter means you’ll be the first to be notified via email of new Aruba blog post, local news about Aruba and special deals.

If you sign up today I’ll send you a “Aruba on a Budget” eBook for free via email as a thank you gift!